A more or less typical Night with Anton

I have been waiting to post this one for a while as I figured I should wait until Anton came back to the land of the living (sober) after his revelries.  I figured posting would be a good sign so now that he has made several I will launch this missive.


So, for all of you gentle readers who have never had the pleasure of an evening at Anton's I thought I would write this one up to reflect the modus vivendi of the group.

Since Anton has seen it all, played it all, and largely owns it all, often times he has no preference for what will be played.  When the rare moment happens and he does have a preference we play that, but usually one of the rest of us will come up with something and bring the appropriate material along with Anton's approval.  Such was the case for this recent evening.


Some months ago I found a set of rules for free on the internet for trireme games called War Galley ( https://www.scribd.com/document/95078886/War-Galley-Rules-01 ).  It requires a significant number of match boxes and matches so it sat on my shelf awaiting developments. 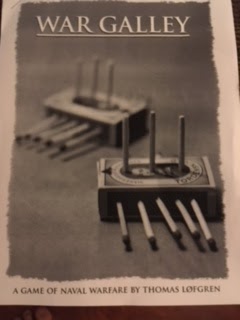 Back in April, one of my local dollar stores got in a load of matchboxes and sold ten boxes for a dollar so I bought five dollars worth and brought the lot along to Anton's last month for a game.  The basics are that you design your own war galley, within certain parameters, and then muck about ramming and shooting up your associates Galleys to cause general mayhem and determine dominance. 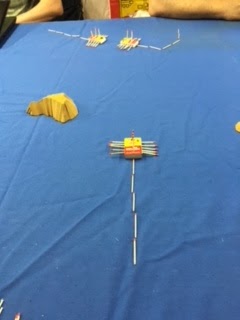 Matches are used for everything (pyros delight) movement, ranges, and shooting are all a function of the matches, there are no dice in the game.  Above you see a couple of boats trying to ram each other (Anton and J&R) while a third boat desperately tries to get to the action (mine). 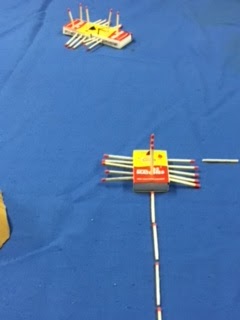 As you can see I did not make it in time as J&R shot the hades out of Anton.  Meanwhile Anton took advantage of part of the rules that the more phases you directly forward the more damage you do if you ram.  So while he took a lot of missile damage, his ram was MUCH more deadly than J&R's.  (Matches are used for crew and damage record keeping as well). 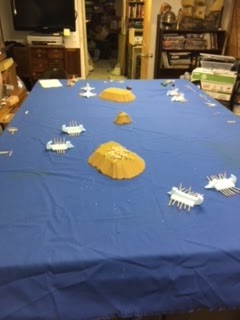 I was adjudged the winner (only boat floating) so we played a second game as in the interim Trunk Monkey had arrived.  Having played two games and then mulled things over Anton got antsy and decided to make boats out of blue foam, matches still used for design purposes.  The four of us took two boats each and went at it again, this time a bit more evenly deployed out on the table top. 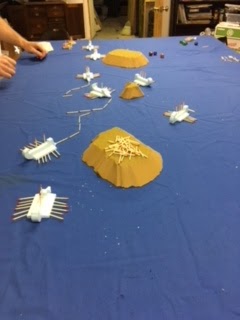 Anton has taken his boats around the island in the foreground and is now headed away from the camera.  Trunk Monkey came on top left of the field and is headed directly into Anton.  I guessed Anton was going to go into the middle and he went around that island so I sailed straight up the middle of the board and out of the way of  the Anton/Trunk Monkey Gamboree.  J&R sailed around the island at the far end of the picture and is trailing Trunk Monkey toward the action. 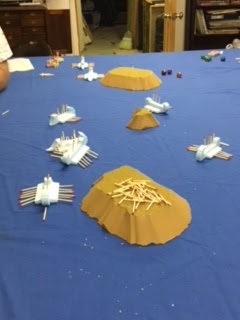 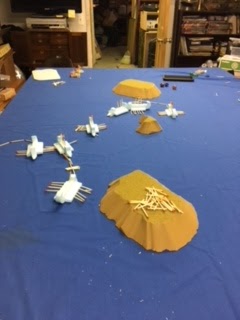 It did not go well for Trunk Monkey as you can see with only three matches left out of the 13 he started with the turn before.  Meanwhile J&R has detached one boat to fend me off while his other heads for the main show. 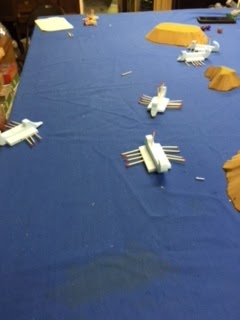 The next turn found both of Trunk Monkey boats on the bottom along with one of J&R's and Anton's remaining Two squaring off against J&R's one remaining boat. 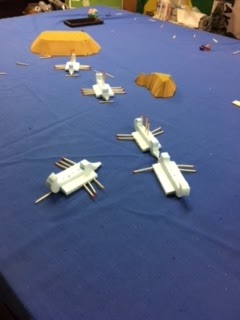 As my boats move in J&R's last boat and one of Anton's destroy each other in a head on ram.  Once again I was declared the winner.  Truth to be told Anton won the second game (this was the third of the night) but I seem to have neglected to take pictures of that affair.  I wonder how that happened?


Meanwhile Anton foisted the boats on me and so I had to do something with them.  Since this game fits into grand design for the Roman games I decided the color scheme would be Roman instead of Greek.  And painted them with that in mind. 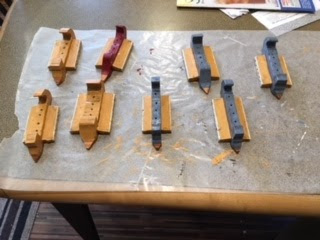 there you go, I rotated it for you


Here are all eight ships completed.  Sorry I have no idea how to rotate the picture.  The four boats at the bottom/right (depending on perspective are the Roman Navy, they insisted on painting their boats that silly shade of Blue as they thought it blended into the sea/horizon.  They also dyed their sails that color and made the sailors and Marines wear it as well.  Under most circumstances this would be a minor inconvenience, but in Rome, that also happened to be the color ALL Slaves had to wear by law, just so they could always keep an eye on the slaves.  So there was no end of grumbling by the sailors, and in particular marines about their uniforms.  Even when stationed on land the Marines had to wear this color of tunic.


Anyway, all modern recreations of galleys paint their oar paddles white so while I have no idea if this was done historically I have followed suit on the galleys.  Most galleys seem to have been left whatever wood color they were but a few were stained so I could not resist making one of mine red, speed kills baby. 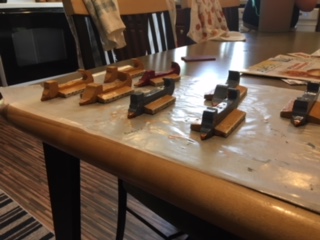 Here is a closer view of the boats from a different angle.  Bronze rams obvious. 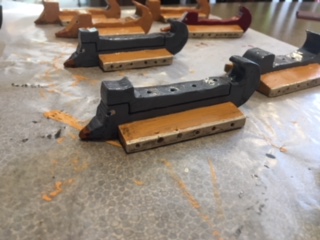 Here is an even closer view on some of the Roman boats, the black line is my attempt o deal with some "production irregularities" by accounting for the famous Roman Corvus (which is in no way accounted for in the rules). 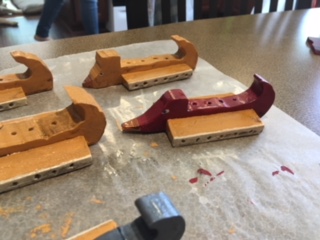 Here is another closer view of the other boats focusing on the red boat.  It came out rather well in my biased opinion, as did the Roman galleys. 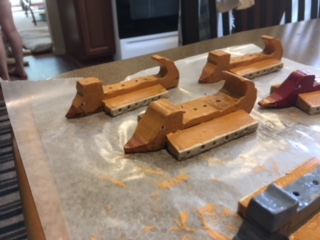 And for good measure and fair and equal coverage here is a closer picture of the plain wooden galleys.


So there you have it.  The first nine photos here detail Five hours of gaming, inappropriate jokes, and generally chewing on the nature of the world; interspersed with three rounds of War Galley, and a fit of blue board construction by Anton.  The last five photos show the longer term results of that evening.


I hope it gives you all a taste of what an evening at Anton's is like, if not, talk to Anton and with his permission show up yourself some time.
Posted by The Housemartin at 9:09 PM