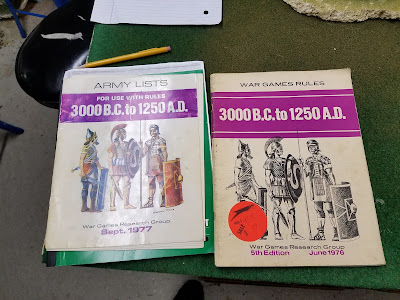 the source of all the trouble

A while back oldSarge mentioned his first wargame, this set me to thinking about mine. After a bit of reminiscing I decided that I would like to attempt to re-create that first game. I know that you can never "go back" but that isn't to say that you can't have a second sip of a fine vintage. I rummaged around in the rules vault and discovered that I still had a copy of the WRG rules and Army Lists. Delighted by the discovery I set about my task. This was made difficult by the fact that the original Gauls and Romans belonged to the fine fellow putting on the game (kudos to you, Bob Webb!) and I have started to build both Romans and Gauls several times but never completed the task. Well, the first sign of a good soldier is that difficulty is met with resourcefulness. No Romans, Later Macedonians will do instead. No Gauls, Franks will have to fill the bill. It still was a small, well-trained force faced with hordes of valiant, if undrilled, warriors.

Recreating the terrain was simple enough, a hill on one side, a woods on the other; both on the centerline of the table. 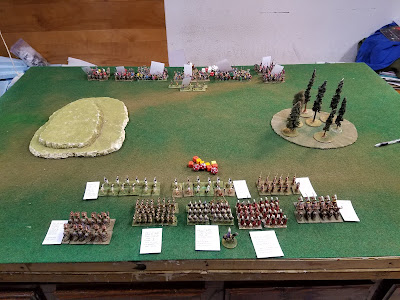 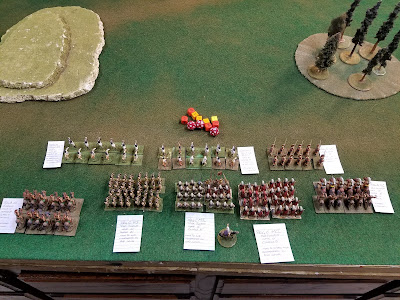 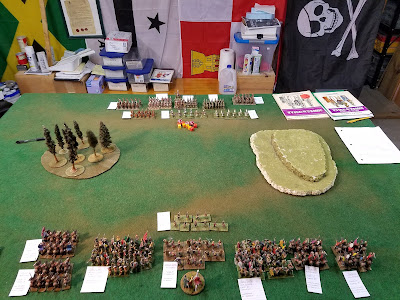 across the field were the forces of freedom;
bold, untamed (and untrained) 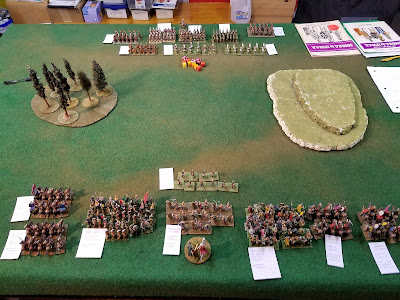 
Unless you have been gaming as long as I have most of those troops descriptions are gibberish (don't worry, I felt the same way when I first read them too). Let me expand and clarify (old hands can skip the rest of this paragraph). These rules divide troops several different ways; first, the troops are either Regular (trained and drilled) or Irregular (familiar with arms and personally capable but not trained to move en-masse), next they are sorted by the amount of armor that they are wearing, this intersects with the type of weapon that they are attacked with to provide a likelihood of receiving causalities (HI=heavy infantry, MI=medium infantry that sort of thing), third is whether or not they have a shield and the weapon they carry such as pikes, long spears, javelins, last is Morale which ranges from A class (hum "We Are The Champions here") down to D class which are too cowardly to merit a song reference. All of these factors, plus some tactical and random factors are cleverly sorted through a chart to generate the likelihood of defeating your enemy. It seems far more complicated than it really is, but back to the game at hand.

With the forces deployed I recruited (dragooned?) my guests into playing the game; R.U.P. and J&R took the side of liberty and freedom (barbarians) and the Housemartin and TrunkMonkey stood firm with the forces of civilization (fascists!), I acted as the Game-Master (rules monkey) having played the scenario (such as it is, the premise is "git 'em")  before and the only person having read the rules this century. The terrain was "disordering" terrain which meant that the close-order troops (cavalry, pikeman and warrior mobs) could not operate there without losing speed and effectiveness. 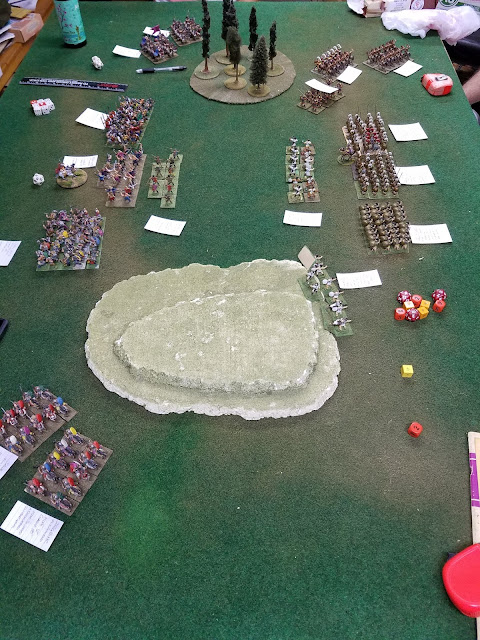 initial moves, WRG uses simultaneous movement
with declared charges at the beginning of each movement turn
here we see the Barbarians have decided on a double-envelopment
while the Macedonians have weighted their force to the right and are counting on bad ground and the Cretan archers to cover their left 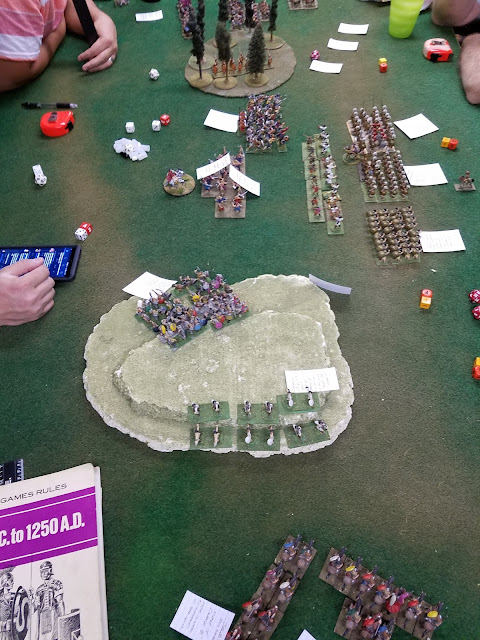 on the far side of the woods the Regular cavalry began the long process of grinding down the Barbarian horse,, closer in the Reg B LMI have slipped unobtrusively into the woods
in the center the barbarian foot surge forward while the pikemen wait impassively
in the near edge of the screen we see the Barbarian horse and a mob of warriors trying to root out the Cretan archers from their hilltop fastness 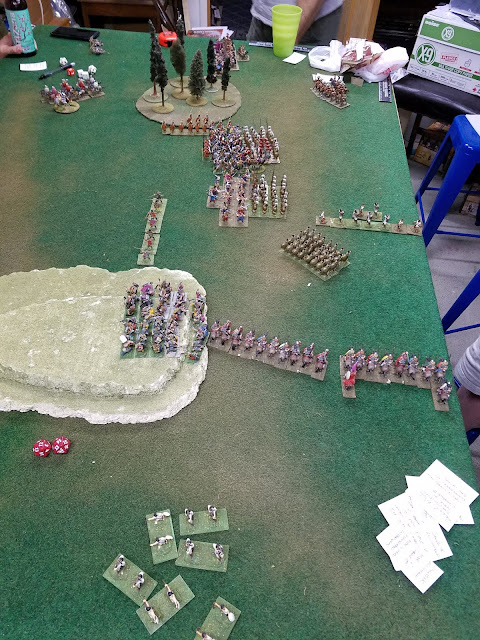 a few turns later; the horse are still slugging it out beyond the woods
while in the middle the barbarians and the pike have met in battle, near the woods the LMI are able assisting their friend while in the center the (supposedly) fearsome Irg A Fanatics failed to go berserk and just sort of wandered into the fight with the pikeman to their front
in the near distance the warband is sorting itself out after sending off the Cretans
while the cavalry are still turning to fall on the flank of the pikemen the point at which things became completely mad, in the far distance the Barbarian cavalry have given up the turning move and are coming back to the battle on their side of the woods,
the barbarian foot nearest the woods are in rout having been assailed from both flanks and their front
the unit of pike formerly in the center of the battlefield are now being chased away by the barbarian Heavy Cavalry, on the extreme left the Barbarian General is busy rallying his troops,
on the right the hilltop warband has attacked the Heavy Infantry pikemen and assorted Light Infantry are hovering about being annoying 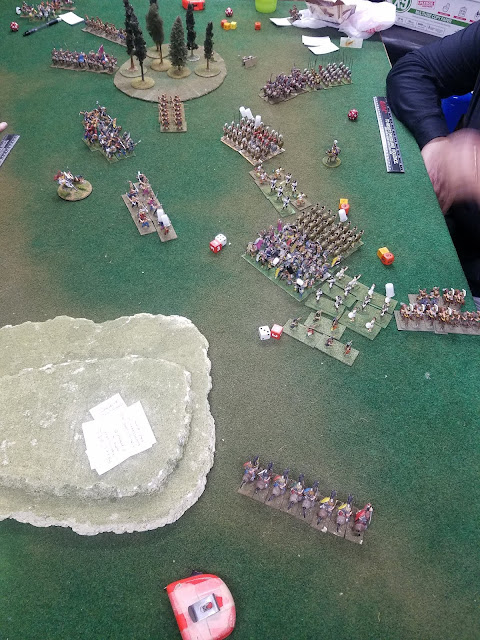 right before the end, things look bad for the barabrians,
beyond the woods the Regular A Companions have rounded the woods,
this side of the woods a much-battered warband faces the LMI and a pike unit,
while in the center the shieldless fanatics are trying to rally in front of a unit of Cretan archers
(who were so unsporting as to shoot at them during all this)
and in the neaerer end on things the warband is rapidly losing to the Heavy infantry pikemen
as the flanking cavalry gets sent on its way by the redeployed Reg A Companions

Things went completely south for the Barbarians in the next turn and they conceded the field.

I want to thank my good friends for indulging my reveries. WRG played as I remembered it; loads of granularity, a stressing of tactics and drill and an infuriatingly complex way of presenting the rules. It is a thing of the past, but it is good to remember where we started to help keep us on track to where we are going.

Thank You; R.U.P., J&R, TrunkMonkey and The Housemartin, I had fun!
Posted by Anton Ryzbak at 9:29 PM