Nope, not the Rolling Stones song (which is a pretty good song but not the subject of this post) 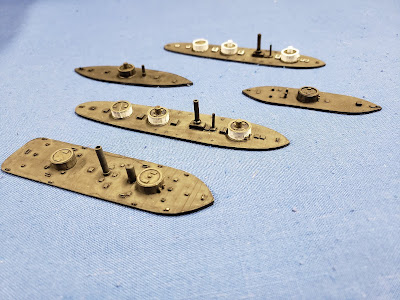 there is something about he fluorescent light that penetrates the
gray paint and black wash to bring the tan primer back to the surface
(at least in the photos, they look fine in person)

OK, so I was griping about everything being black. It isn't exactly true, but darned close. On the other hand it certainly makes it easy to get stuff finished. This afternoon I assembled and painted these little beauties; the Monitor, 2 x Roanoke, Milwaukee, Passaic. They were painted the same way as the last batch; light khaki spray primer, a couple of light coats of medium gray then a couple of washes of black. I still have to go back and pick out in pure black the gun muzzles and the deck fixtures. The white turrets on the Roanoke models is suggested by the instructions from Thoroughbred and I don't know enough about the period to argue with the fine folks who produced these kits. After this I just have a few side-wheel double-enders and a couple of steam frigates. The jury is still out on the issue of bases. There is a lot of fragile mast and yardarms on the sailing vessels. 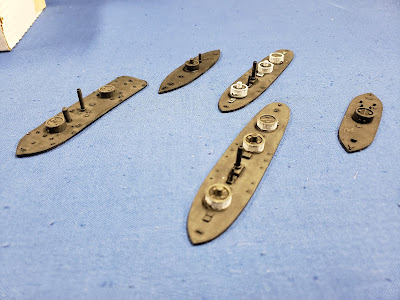 the growth in size in just a couple of years is stunning;
the Monitor (far right) 1861 next to the Roanoke (three turrets) 1863 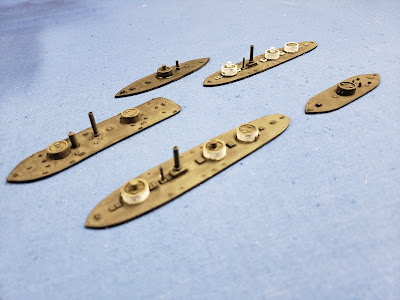