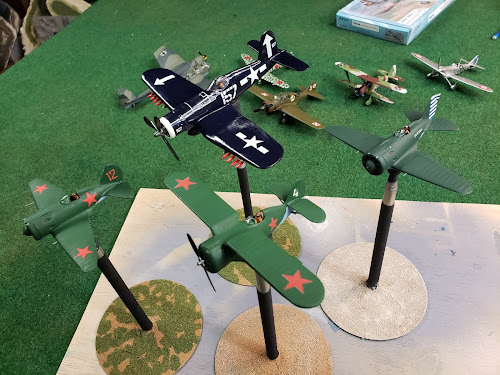 this weekend's efforts....three Polikarpovs (one in Chinese colors) and a Corsair

In my efforts to get a sufficient force together for a game of Check Your Six (or something to that effect) I decided to stop pussy-footing around and get into production mode. I broke out two of my old Revell I-16 kits, a Heller I-153 and an old Testors Corsair kit. The Revell I-16 has been reviewed previously as has the Heller I-153  and both are pretty straightforward builds. Dating back to 1953 the Testors Corsair kit is a weird combination of engraved panels lines and poor casting. As a static model it would be much better because little effort was made by the designers to make the parts fit in a "wheels up" mode. It is a primitive kit but will do the job as air-support.

The Revell I-16 kit benefits from having a complete set of "wheels up" landing gear doors while the Heller I-153 has all the parts but leaves you to figure out the assembly in the retracted position on your own. One of the I-16s and the I-153 were painted for the Russian Front in the period of 1939 through 1942, medium green and bold red stars. The remaining I-16 was painted in nationalist Chinese markings of dark green upper surfaces, a striped tail and roundels on the light blue underside. The Corsair got the all navy-blue colors for the Korean conflict (it is destined to my friend Rich's collection).

Now I just need to get some opponents finished........