More Silliness with Blue Board

When I was a little kid my mother would often ask of me in exasperation when I had done something particularly daft﻿, "What has come over you?" . Being a might bit simple I would answer, "I haven't a clue", which often earned me a spanking (my poor mother thinking that I was being a smart-aleck). This sort of thing still happens to me from time to time (the being daft, not the spanking). Witness this, I was sitting in my basement bored to tears of painting sedimentary layers on the "dramatic hills" (more on that in a bit) when I was overcome with the desire to cut foam.

Casting about for something to carve I remembered that we have been slowly gathering steam for a new GorkaMorka campaign and were also building a table-sized Mektown (more on that in a bit as well) and it occurred to me that even Orks need a place of worship. Inspired by this thought I grabbed a stack of circular off-cuts and began carving away at them, the result being this; 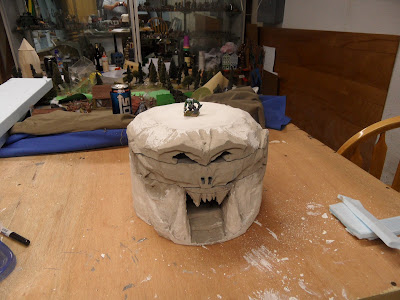 not finished yet but moving along 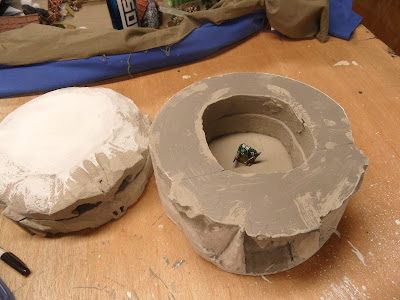 having constructed it so that the interior is accessible
it occurred to me that I have no idea what should be in there,
anybody with ideas or references please advise 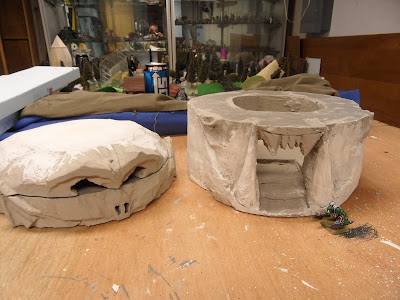 the Ork in front was the model for the carving,
he really isn't that ugly, I am a terrible sculptor 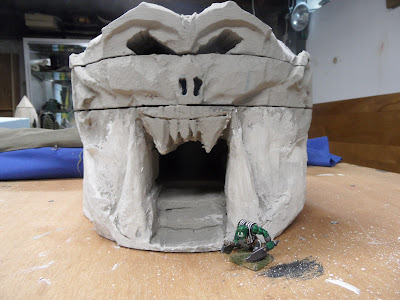 I am working on reducing the visibility of the joint lines 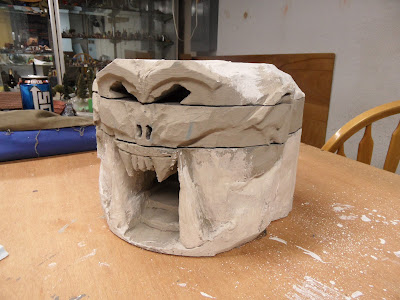 ﻿     If I can resist the temptation to paint it green I am sure I can work it into a VSF scenario as the "Temple of the Monkey-God" or some such nonsense. The real problem is that I now want to carve a giant skull to put on the end of my Pirate Island..............
Posted by Anton Ryzbak at 11:09 PM