OK, Ok you can probably call it some sort of disorder. I like to scratch-build large models of warships, not those fiddly scale model ones, wargaming models that evoke the spirit if the time without getting in a sweat as to how many rivets there are on a companionway hatch. I confess that I have been doing this off-and-on for years﻿. Below you will find photographic evidence. 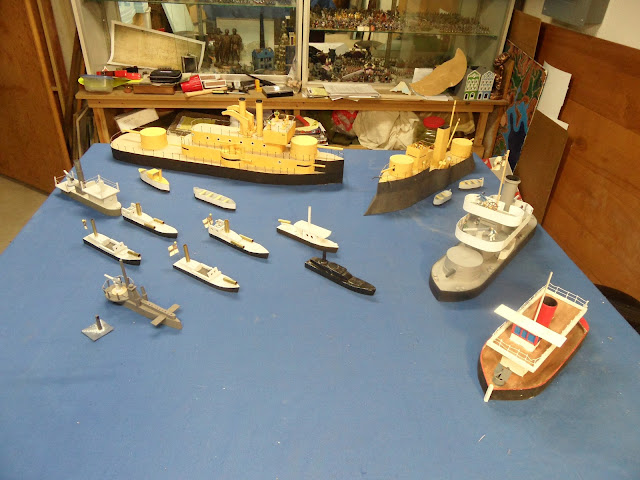 Above you see the products of my disorder. I will start in chronological order; lower right is the steamer that I built way back when we were just beginning to play colonials (I had just watched Khartoum - steamers were a big thing in that movie), next is the turret ship (clearly influenced by the H.M.S. Devastation) followed by the fleet of little ships, two light torpedo baots, two heavy ones, an "old-fashioned" torpedo-launching boat (dead-center in the picture) and a "stealth" fast torpedo boat (all black, just nearer than the old-fashioned one), in the lower left we find the steam-powered submarine in it's sufaced and submerged modes and, last but not least, we find the Molly McGuire on the far left she is Mad Mike O'Hara's personal rivercraft. You are probably familiar with the two charaters in the very back, the as yet unamed Armored and Protected Cruisers.