First test of battle for the new fort

We decided to take the new fort out for  spin, and the new sloop got involved as well.

SPANISH    In a small coastal town the local governor has been building a sloop that he hopes will help deter the troublesome pirates that have plagued his shores. He has not been able to afford guns for his little project just yet so the ship sit unarmed at this time.

To his surprise during a recent storm one of the Treasure Floita grounded on a nearby shoal and broke its keel. This represented a huge opportunity for the Governor who rescued the crew and has been running daily salvage operations to gather the treasure. He has had his divers carefully noting the location of the cannons in the shallow wreck and plans to arm his new sloop as soon as the authorities gather the silver (well, most of it, some got "lost" and now resides in the Governor's personal vault).

The recovered silver has been stored in the Customs House in the care of the King's Agent and guarded by a company of the garrison's soldiers. Pirates were shadowing the Flota and the Governor is worried about an attack on his little town.

PIRATES: A recent storm has wrecked your one good ship and cast you and your crew ashore near a small Spanish outpost. The Treasure Flota that you were shadowing has disappeared over the horizon. You and your men are in a desperate situation, the two remaining boats only stay afloat by way of prodigious bailing and can only carry twenty-four men between them.

Your are about six miles south of the Spanish town, just far enough away to have gone unnoticed thus far. The one bright spot on your horizon is that it appears that there is a shiny new sloop in the port, it sails out each day at dawn and returns heavily laden, you assume it is a fishing boat but it will do nicely as a Pirate vessel as well.

You have drawn up a plan to send some hardy souls into the harbor just before dawn in the two leaky boats to distract the garrison while the rest of the force attacks from landward. Your objective is the capture of the sloop which you can then sail down the coast and arm by recovering the guns from your wrecked ship. 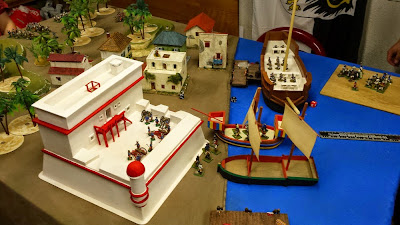 despite repeated opportunities to spot the incoming Pirates the sentry in the fort failed to notice them until they were disembarking (lousy dice rolling or a very thick fog, hard to tell) 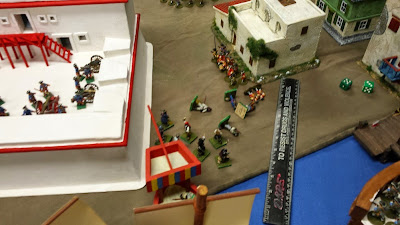 the sentry finally fired the signal cannon and the troops guarding the Governor's house filed out into the street to encounter the Pirates rushing toward them, an exchange of fire broke out 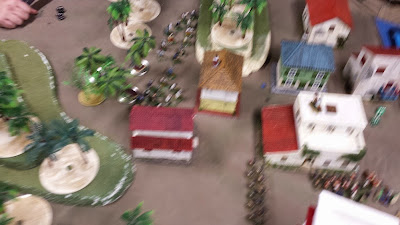 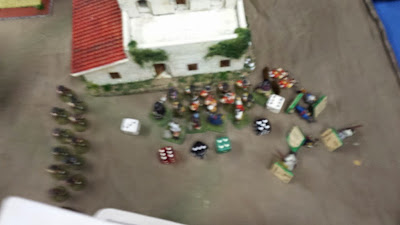 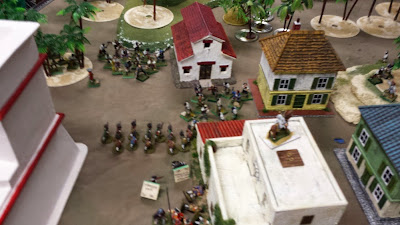 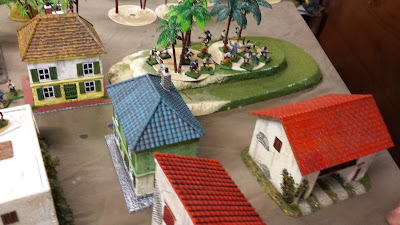 another party of Pirates remained hidden in the woods trying to decide which house to sack,
the brown roof was the doctor's (with a treatment for the scurvy that troubles the crew), the blue roof a bordello (with a serious risk of distractions) and the red roof is the Custom's House (with the treasure), the Pirates knew nothing of this and chose the Custom's House as it was on the most direct route to the sloop. 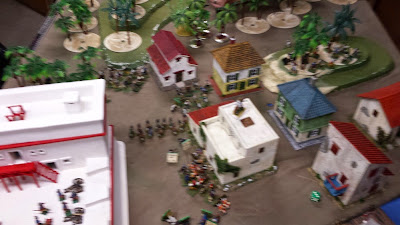 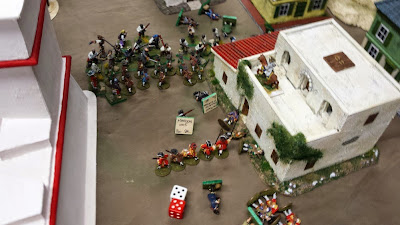 then the Pirates charged in, the Militia fought like tigers defending hearth and home
but were no match for the ferocious killers from the sea,
it was the Guards turn to watch dispassionately as the fight went ton 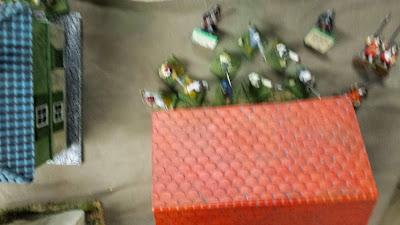 the Pirates attacking the Customs House were surprised to find it so heavily defended and sensed that there was something valuable inside, a vicious struggle to capture the build took place that went on for many turns slaying most of the Pirates and the company of soldiers protecting the treasure 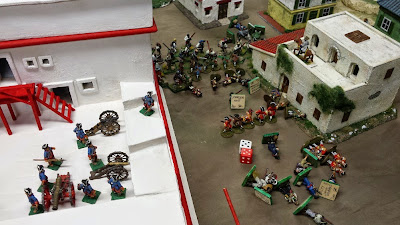 as the last of the militia fell before the swords of the sea-dogs the gunners in the fort watched pensively and the few remaining soldiers of the Guard readied themselves for the coming onslaught, the Governor defended his house alone 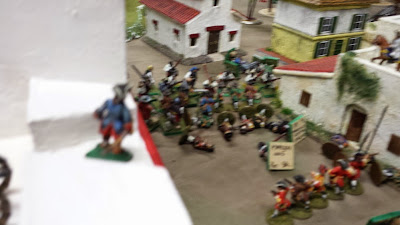 in one last, feeble round of fighting the militia fell 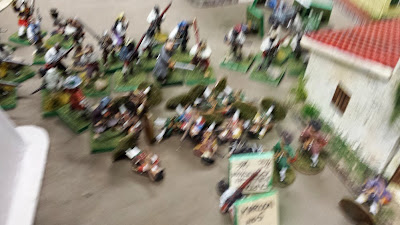 and the angry tide of Pirates swept on 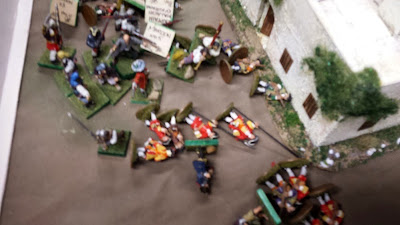 the Guards, like Spartans, refused to run and died to a man, still in line of battle 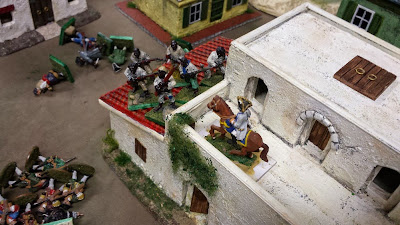 the Governor, singlehandedly, repulsed three attacks on his home
(it must have been the fact that he was riding a horse on the balcony!!!) 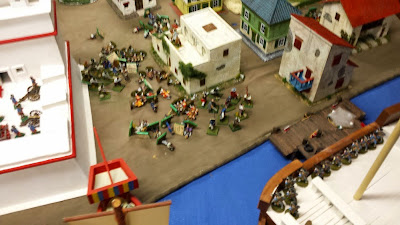 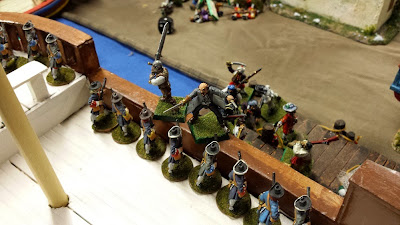 heedless of casualties they swept forward, braving a hailstorm of musketry they carried on,
storming across the dock and up onto the sloop which was defended by a company of soldiers 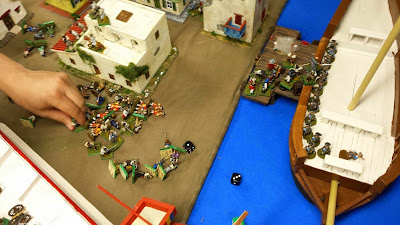 other parties of Pirates moved to re-enforce the attack on the ship,
the forts gunners firing as fast as possible to stem the tide 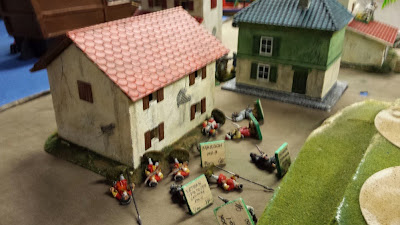 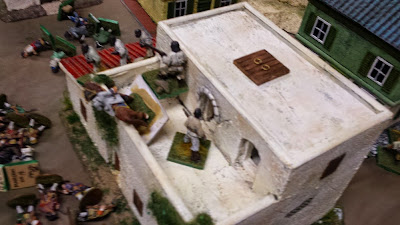 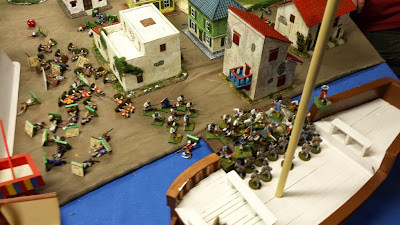 more Pirates streamed toward the sloop, now their only means of escape and freedom 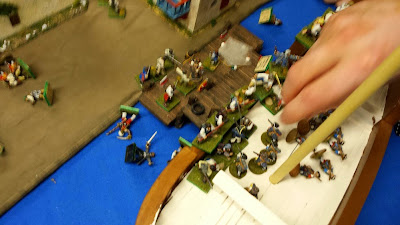 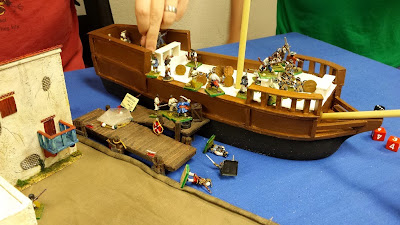 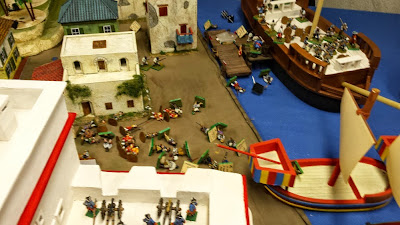 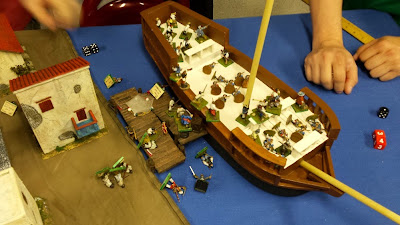 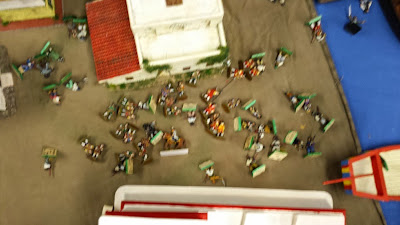 casualties littered the  streets, the quiet town would never likely be the same 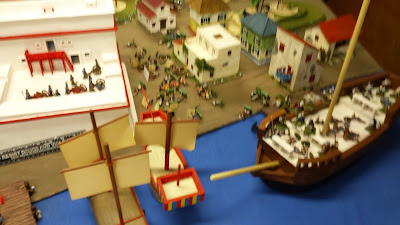