Book Review; The Swedish Army in the Great Northern War 1700-21 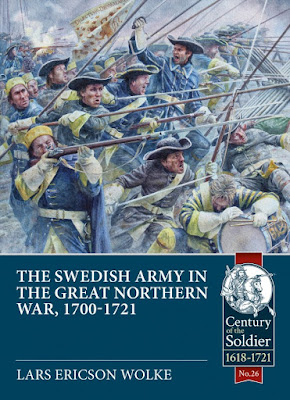 Returning to the group of books that I got at Christmas time I will look at Helion's The Swedish Army In The Great Northern War 1700-21 by Lars Ericson Wolke. I have long been interested in this conflict, it is a demonstration of how, through training, discipline and willpower, a tiny nation can impose (for a while) its policies upon its neighbors. The tool that allowed the Swedish monarchs to do just that was the Swedish Army.  In just over 100 pages this book provides the reader with an insight into the inner workings of that army. If I had to recommend just one book one this subject this would be my choice, it certainly provides a wargamer with everything they would need to hit the ground running.
The book opens with a strategic overview that sets the larger stage for events of the Great Northern War. It then addresses the source of Swedish manpower before moving along to inner working of the armed forces. A quick survey of the part that permanent fortifications played in the Swedish war planing is covered. The next chapter considers the equipment and tactics of the three arms and gives a description of the uniforms worn at the time.

That groundwork having been laid the author moves on to the meat of the subject; the actual campaigns of the Swedish army as it battled the armies of Denmark, Poland and Russia. He opens with a short description of the campaigns to provide a setting for the battles that follow. This is supported by decent maps (that lack terrain features beyond rivers, why is it the military book-makers believe the landmasses of the planet are absolutely flat?). With that framework established we are then given accounts of the battles of Narva, Fraustadt, Poltava, Helsingborg, Gadebusch and Sodra Staket. These are  supported by  good maps with enough detail to allow a wargamer to build proper terrain. Orders of battle are suggested but not enumerated; to properly assemble a force for any of these battles further research would be needed. The battle reports describe the actions of both forces and highlight specific details and events.

The book closes with a chapter placing the Great Northern War in the larger context of European events and then a chapter on conclusions. This is followed by a table listing the units of the Swedish army a section devoted to the  description of the color plates and a brief bibliography.

Throughout the book there are many illustrations; period uniforms and standards are photographed in fine detail, while contemporary paintings and drawings illustrate the commanders and detail of uniforms. The real heart of the graphic content is the center of the book, here we find a host of color illustrations by Sergey Shamenkov displaying the various uniforms of the Swedish army, this is joined by a section that shows the standards that is provided by Lesley Prince and a series of schematic depictions of Swedish uniforms from David Wright.  Collectively these provide a figure-painter or wargamer with a solid basis for creating their own miniature  army.

All in all an excellent effort. This book answers most of the questions that a gamer would have regarding the Swedish army under Charles XII. It does it in a compact, easily absorbed and eminently affordable package. Kudos to Helion and Mr. Wolke for opening a window into a little-known conflict.

Very Highly Recommended!
Posted by Anton Ryzbak at 10:46 AM