Book Review, The Russian Army in the Great Northern War 1700-21 from Helion Books 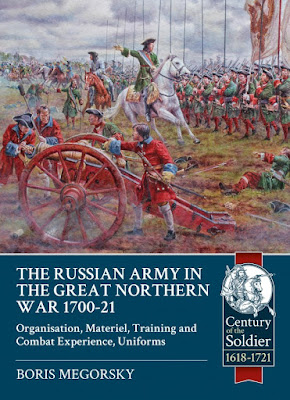 I have to commend Mr. Megorsky and Helion for producing a volume that will provide the wargamer with almost all of the information that they need to build, organize and paint a miniature force to represent the Russian army of the Great Northern War. Tipping the scales at slightly less than 300 pages this magnum opus brings together a vast amount of information, most of it from original sources, that simply isn't available to the average English-speaking hobbyist. As the subtitle says it covers organization, materiel, training, combat experiences and uniforms. I would unreservedly recommend this book to anyone building a Petrine Russian army. It simply is the best single-source  volume that I have ever seen on the subject. While certainly not a leisurely read this is a rock-solid reference that you will find yourself looking into time after time.


The chapter on organization follows Peter's efforts to turn his Muscovite army into a modern disciplined force. It traces the growth of his trained forces, the New Army, but also highlights the fact that he was repeatedly forced to use "unreformed" units, formations that would have been more at home in the Thirty Years War than in the beginning of the 18th century. It also brings into focus the sheer amount of energy required to overcome the inertia in such a vast nation. This chapter explains the rise of the drilled units, first as Peter's youthful "playtoy" battalions of servants and friends, followed by their evolution into the premier regiments of the Russian army. The cavalry are given a similar treatment as Peter forced them out of a feudal mold and forged them into a disciplined and effective force that would be the match of any other European power. The vast leaps forward in the artillery, fortification and naval (this one pretty well built from scratch!) are covered as well. Several illustrations are provided that demonstrate the formations that these troops would use; both from period artwork and through photographs of modern reenactors.

In the next chapter the book provides information describing the clothing and equipment of the Russian soldier. Everything from bayonets to cannons is covered, often illustrated with photographs of surviving equipment or period artwork. Additionally there are many photographs of the Preobrazhensky Life Guards Regiment reenactors wearing the kit, which provide an excellent understanding of how the items were worn and an understanding of the scale of the items. The chapter closes with a brief discussion of the persistence of "Oriental" dress in the army and a description of the ships of the navy.

Immediately after this chapter is a thirty-two page color section featuring the artwork of Nikolay Zubkov depicting Russian military dress, this is followed by photographs of surviving military standards then a section of period drawings of various standards which is supplemented by three pages from Lesley Prince with some reconstructed standards. Four pages of photographs of surviving uniform and equipment items help provide an idea regarding colors (although three centuries of fading have doubtless taken a toll) and some insight into just how ornate some of the headgear had become. Four pages of uniform schematics cover a good many of the regiments that were raised under (or converted into) New Army units. Finally there is a photograph of the Battle of Poltava with an inset showing detail. This chapter section is almost worth the price of the book alone; Mr Zubkov's art, although darker than my taste would allow, is on a par with anything that I have seen in the field of military uniform illustration. I would love to own a few of his originals. In the general matter of illustration the entire book is peppered with photographs of existing equipment, reenactors, period paintings, maps and drawings. These all serve a purpose of providing a visual context to the written material presented in the adjoining text. In all a superlative effort at combining illustration with the written word. Bravo!

The penultimate chapter covers training and combat experience. I found it interesting and very instructive that the author did not let himself fall into a recounting of the war in general terms. In this chapter he details the Herculean efforts that Peter put into turning what was effectively a below-par Renaissance army into a modern combat force. The struggle to train the troops, to get them to give up old-fashioned methods and ideas, and to deal with the simply vast spaces and numbers come into focus. Mr. Megorsky shows how Peter looked at, and tried, the various militarily theories in vogue at the time as he sought to reform and discipline his forces. He covers the training of the individual soldier and then progressively higher formations. The unique Russian situation of facing European foes to the west while having to deal with Cossack and Tartar light cavalry in the vast plains to the south and east meant that the Russian army had to be capable of operating in a way unlike its more focused western opponents. Megorsky illustrates the development of Russian tactics and shows the lessons learned from the experiences of combat and how they were applied to future operations. Two lengthy sections close the chapter; the first on siege warfare and the second covers the creation and development of the Petrine navy (a subject that deserves an entire book in it's own right).

In a  short final chapter Mr. Megorsky draws his conclusions about the Russian armed forces during the conflict. He points out that there had been Western ideas in play before the rise of Peter the Great, but also indicates that the level of change that Peter was able to force upon the Russian polity was enormous and completely changed the balance of power in Europe. During the first half of the 18th century Russia was born as a Great Power and, even if Peter the Great may have not been the father, he was certainly the mid-wife that made sure that Russia was fully integrated with the Western Powers.

This book forms a companion-piece to the Swedish Army of the Great Northern War by Lars Wolke also published by Helion. A wargamer in possession of these volumes would be superbly equipped to recreate both armies. Mr. Megorsky has done an excellent job of taking a huge subject and concentrating a vast amount of information into an easily digestible form. If you interested in wargaming this conflict, or would simply like to have a better understanding of warfare in the early part of the 18th Century, this book will provide an excellent entry point. Now, if Helion could just get somebody to cover the Danes, Saxons and Poles at such a level........and perhaps another brave soul to write a military history of the conflict (with decent maps) the world would be a better place.

Recommended without any reservations, buy this now!
Posted by Anton Ryzbak at 11:36 PM