A House Divided, Followers of the Small Plate Heresy 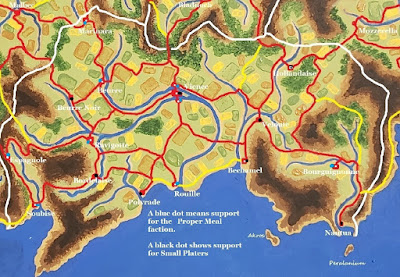 the tortured land of Gluttonia

The untimely demise of Ferdinand III has left a rift in the fabric of Gluttonian society.His jovial nature and the force of his personality kept the tension between the factions of Proper-Mealers and Small-Platers under control. Without his firm hand on matters of state things have come entirely unstuck. Even as the army was en-route home from Mindoro the tension had risen to a fever pitch, with the Small-Platers blaming the Proper-meal faction for the death of the King. The return of the troops to their respective cities and the discovery that all of the heirs to the throne were in the hands of the surrounding kingdoms have left the nation an armed camp on the brink of civil war.

The more progressive soldiers gravitated to the Small-Plate faction, these troops joined together and and sought to employ the latest fashions in combat. These opinions tended to be grouped by area and thus the various cities declared for Proper-Meal of Small-Plate, not to imagine that there was complete unanimity within any community, just that there was a prevailing mood.

With no King on the Throne the cities have individually declared for Hanz, binding themselves in a loose coalition and engaging in mutual defense agreements, both to defend the realm and to ensure that no Pretender claims the throne. They look to Peter the Famished as their source of inspiration and support.

Generals have only their prior ranks in the Royal Army to guide them as to their place in the hierarchy, they have chosen to observe this ranking until merit and skill make clear who the new leaders should be.