A Minor Diversion Part 5, A visit to Knuckle City Tavern

Saturday night came to find Dan deftly assembling his tavern as we assigned models to the various players and rolled up stats. We had decided to use the Brewhouse Bash rules for GW. These played well and fast (not bad for a ruleset almost twenty years old) and engendered much hilarity. When you think of it there would appear to be little difference between Dark Ages Viking types and Orks.

More after the break....


Each player placed his figure in the bar and action got under way right off with a patron taking a poke at the barkeep. Predictably things went rapidly downhill from there. The players quickly learned that there was a table exactly three spaces from the door. This table became known as the "Launchpad", as each player got KO'ed and was issued a new character they dashed in the front door, hit the Launchpad, and creamed the first other character they could find that had been foolish enough to remain in the Zone of DOOM. 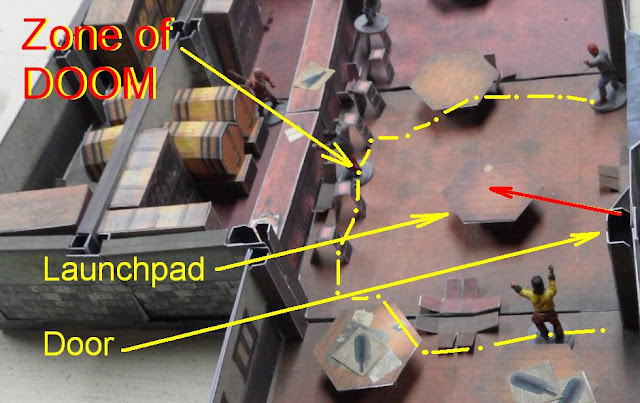 A larger veiw shows just how strategic the Launchpad was, it dominated the entire center of the playing area. It wasn't until nearly the end of play before someone realized that they would be better off with the table moved elsewhere. 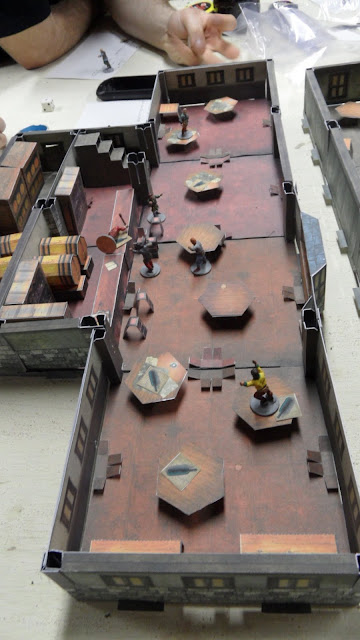 You will notice many characters standing on things in the photos, this is due largely to a quirk in the rules (they being for a boardgame) that requires you to be in the same square as an object to pick it up. Thus many a time a player found himself standing foolishly atop a stool or table before hoisting it manfully over his head as a preparatory to throwing it at another character. The rules also state that a thrown object is demolished upon landing, this lead to a gradual elimination of furnishings as the players enthuiastically whaled them at each other. After about an hour of play we discovered that there was a back door through which we could gain entry to the store room, this lead to an unsightly scrum behind the bar. 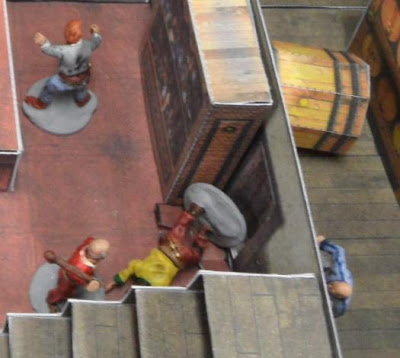 As this unpleasantness was going on Big Tim O'Reilly and Sven "The Hand" Johannssen decided to do a re-enactment of the Rocky movie big fight scene on top of the bar with a dozen-turn-long battle of knock-downs﻿ that finally ended in Sven taking the fall. 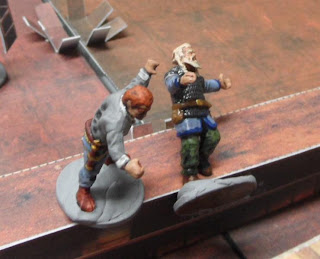 All the while this was going on Horace was prowling around the second story of the bar, pitching chairs and tables down into the main area upon anyone foolish enough to be caught in the open. He even managed to tip a couple of beer kegs over the edge of the balcony and onto an unsuspecting patron.
Time was winding down and we decided that as each player was KO'ed he would not get a new character. This quickly lead to a Last Man Standing situation where Big Tim and Curly were busy bashing the daylights out of each other and failed to notice that both William the Bastard and Inigo had picked up tables and were preparing to deliver their lethal projectiles. 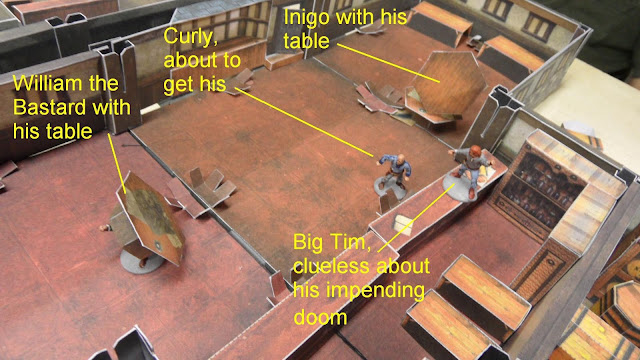 The endgame played out with Inigo as the sole survivor and true King of Battle. We decided to pile the bodies and thrown tables and chairs in the area they would have been if the rules did not require their removal to provide a graphic result and enhance Inigo's achievement. 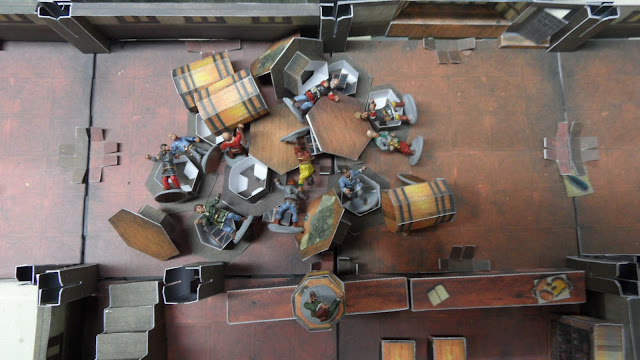 Finally, to get a handle on how complete and complex the tavern model was, we had Dan stack up the second story atop the first. It is a truly superb model and I will be doing a review of these interesting and inexpensive products very soon. 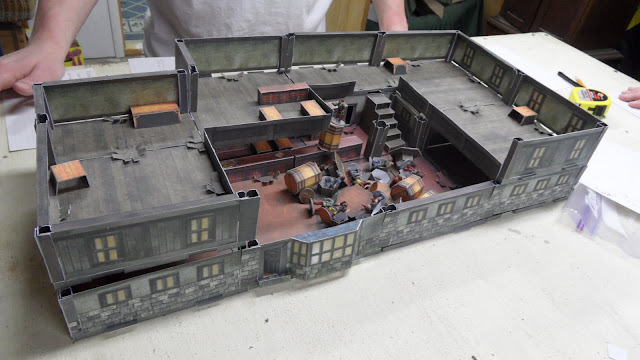