Last weekend Dan said that he would build the medieval pub for a barrom brawl game if I would do the minis. He implied that he could be ready in a week, I undertook to meet that challenge. Me and my big mouth.

First step; find figures that would be usable as patrons of the fine establishment. Easier said than done, after poking through my mile-high mound of 25/8mm figures (and finding nothing suitable) I decided to go with plastic Vikings and Celts. I figured that they would provide the basis for the conversion, all I would have to do is go easy on the spears and swords and close a few open hands and I would be in business. So I promptly grabbed a box of Wargames Factory Celts and another box of Viking Huscarls and set about finding suitable poses for the conversion process. 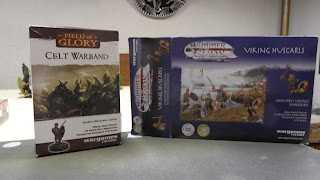 I tried to get as many poses as I could without getting into ninja-style weirdness (I also had to avoid the bare-chested Celt figures...this is a proper barrom brawl, not some WWE extravaganza). I ended up using eight Celt leg/torso sets and four Huscarl torsos. I then carved away the long swords from the Celt figures, either removing them entirely or reducing them to daggers. This is easy with a sharp X-Acto blade and the soft plastic that Wargame Factory uses, a little file clean-up and they were good to go. The next step was to mount these on some metal discs of suitable size and weight with my favorite glue Liquid Nails. Use a pea sized bit of glue and allow it to ooze out from under the figure base a little when you squeeze them down, see below; 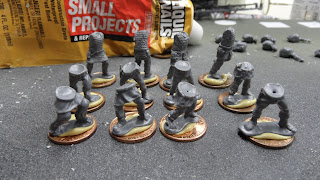 Allow the glue to "skin over" (takes about five-ten minutes) and with a moistened finger smooth out the glue to blend in the figure base. Use water to moisten your finger not your mouth, this stuff wasn't meant for eating. 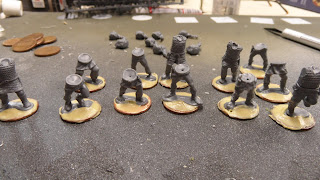 I then assembled the torsos onto the legs, trying to get as dynamic "fist-fighting" poses as I could. Some worked out really well, the others, well all I can say is I wasn't as happy. You judge for yourself. 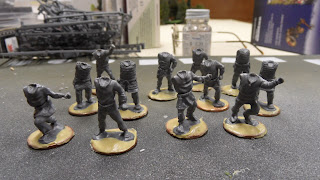 Next came the selection of heads and arms. Heads were largely dictated by the lack of helmets. I made sure they were the most "Middle Ages" looking heads out of the lot. I did the Vikings first, the set has nice heads that fit well to the torso. Next arms, this is where it got difficult. The figure set was intended for the models to be posed prepared to commit mayhem upon their opponent with weapons in hand, not knuckles. I went through the available arms a couple of times before I settled on the ones you see here, not perfect but they will do. 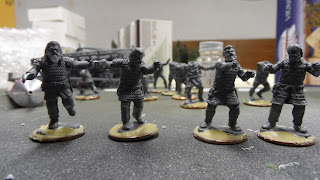 Selecting heads was even easier for the Celts as there was a larger set to choose from. Arms again gave some problems, and in the process of putting together the models, I produced some awkward poses. I armed one figure with a cudgel feeling that the barkeep would have something to hand to lessen his customers desire to break furniture (and other paying customers). 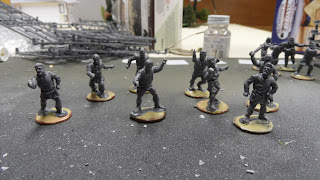 A little bit of final clean-up on the mold lines and such and they were ready for a coat of white paint. 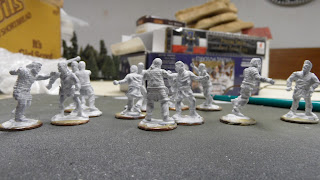 Tomorrow they get the beginning of their war-paint. Updates to follow.
Posted by Anton Ryzbak at 1:16 AM