The Battle of Newville

Having built a village in the course of a couple days work we decided that we needed to break it in properly with a battle as quickly as possible. Kris created a scenario wherein many factions were operating in the town with different objectives that may or may not conflict. These factions were either resident in the town (the Police, the Garrison and the Pasha's men) or entering from outside (the Raiders, the FFL and the Germans). We used a variant version of my Wild West Rules that allows for posse members to act at the character's behest, in a limited sort of way (these will be published here as soon as they are perfected). 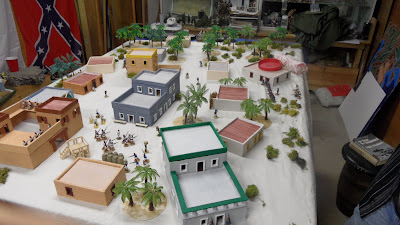 the town from the west 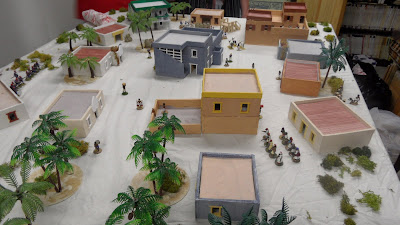 the town from the west,
the heavily-armed civilians and military contingents peacefully going about their business

I can't give a play-by-play as to what happened to the other contingents but I will track the actions of the German contingent (as I was their commander) with asides to bits of the action as I remember it. I was to arrive by gunboat but I was only dealt shooting cards for the first three turns so I remained off the table and inactive. The French Foreign Legion had no such problems as they streamed onto the table from the southern edge intent on finding the British spy. They exchanged pleasantries with the local gendarmes and passed around pictures of the suspect while offhandedly mentioning a reward. This produce almost instant results with reports being made of a secretive Englishman hiding in the upstairs of the bar. 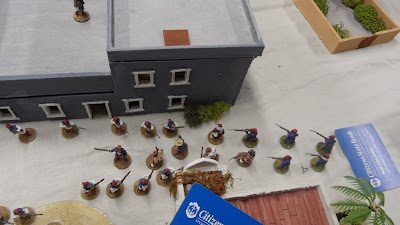 On the northern edge of town the Raiders had broken into a house and were busy ransacking it, The Garrison troops bestirred themselves as the ransacking created a great deal of noise and began to file out of the fort and head east. After a short exchange of gunfire with the garrison troops and the police the raiders began to look elsewhere for fun and started toward the waterfront; who doesn't enjoy a stroll (outburst of pillaging) along the river on a warm summer evening ? 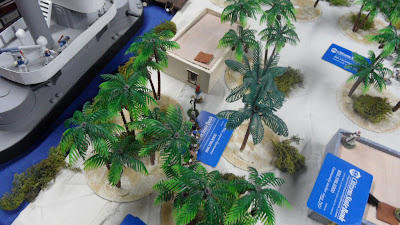 nothing like an unguarded back window on a warehouse

Finally, the Germans got  movement cards and set off to deliver their ultimatum to the Pasha they filed onto the dock in a typically orderly Teutonic fashion and set off toward the Palace (which they could see at the other end of the main street). The main street was a busy place by-the-by, the FFL was storming into the bar, the police had manouvered into a firing position facing the Raiders, the garrison troops were now facing toward the racket being made by the FFL. The Germans marched straight up the street with nary a thought to anything but their mission. 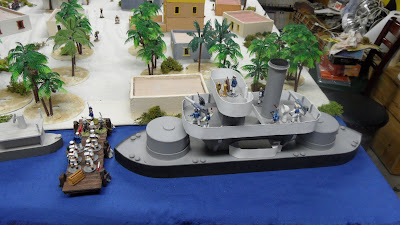 the Germans disembark,
the gunners were disappointed that the dock stopped them having a view up the main street 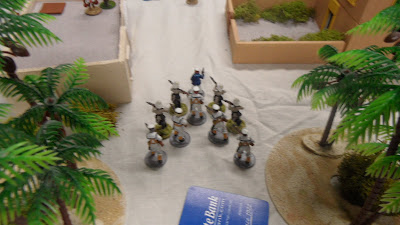 off they go, X.O. Hammer in the lead

The FFL stormed into the bar and found it full of patrons but very short on British spies so they thundered up the stairs and began searching apartments. Hearing the noise the spy fled across the roof of the bar and then jumped to the ground (breaking his arm - failed a Luck roll) followed closely by the FFL commander (who passed his Luck roll and emerged unscathed). They landed in front of a very surprised unit of garrison troops who attempted to arrest them. The FFL commander wasn't about to be arrested by the likes of them, and, in any event,  cared little for a stay (however brief) in a Daftrican jail and thus resisted. The garrison troops commander joined in the fray and, after the smoke cleared, the end result was two dead leaders. At this point the spy jumped up and fled into the jungle. 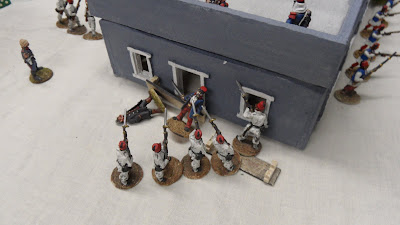 the FFL leaders dies in a hail of bullets, soon to avenged by his men on the rooftop

The now leaderless garrison troops filed into the bar and engaged in a short-range firefight with the police in the street outside (longstanding rivalries having only been restrained by the now dead garrison leader) through the windows of the bar, taking occasional shots at the Pasha all the while in an attempt to clear off that power as well. The police closed with the building and a perfectly ferocious fight developed with the troops shooting at one another at arms length. The Germans marched right past this mess and approached the Palace and demanded an audience with the Pasha. The Pasha, having just seen his loyal infantry commander gunned down by rebellious garrison troops, pervaricated. This was not to the liking of the Germans, to emphasize how dearly they wished to address his Highness the sailors stormed into the downstairs of the palace. This focused the Pasha's mind enough that he came out to address X.O. Hammer and, upon hearing that all the Germans demanded was the release of the fraulein being held prisoner in the palace, he promptly complied. She was escorted to the door and pushed out by the Pasha's guards. 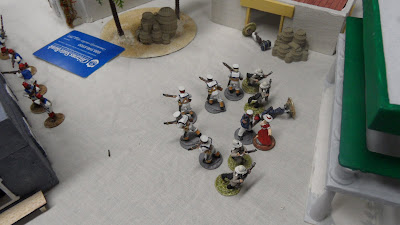 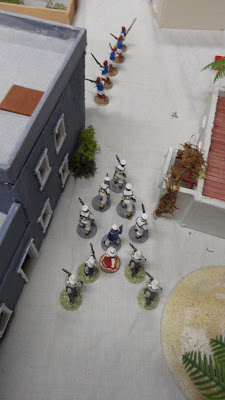 and off they went

As that was happening the Raiders had filed out of the front door of the warehouse only to find that the police had taken positions to block their path, In desperation they ran toward an unattended steamboat tied up at the dock, losing men and loot all the way. The police closed with them in an attempt to wipe them out with gunfire before they could get the boiler fired and steam raised. This proved to be a costly move in the long run as the Raiders are fearsome hand-to-hand warriors and when cornered are apt to take desperate measures. Knowing that they were sitting ducks on the crowded boat a few of the battle-crazed thieves charged the police, the resulting melee went entirely in the favor of the brigands and they were able to retreat to the boat in peace. The German sailors watched this in bemusement as they had orders to only open fire if the ship were endangered or the landing party was at risk. 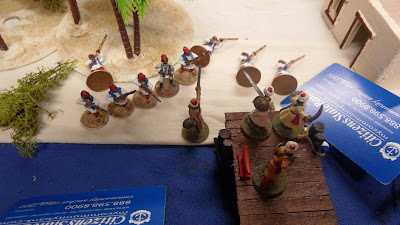 the bayonet is no match for sword and shield

Thus ended the Battle of Newville; the girl rescued, legends born, a bar wrecked, a steamer stolen and the Pasha's palace shot up right thoroughly.

All in all a quiet night in Daftrica.