Looking for something quick to build before the Saturday game my eye lighted on the Zvezda kit of the Hanomag sitting on my workbench's "in" pile (which, by the way, is a pretty big pile). I thought to myself, "Ah, that would be fast". Well I wasn't wrong. As has become the trademark of Zvezda kits this one is a sharp bit of work. I did encounter one problem and one oversight. The problem I will explain in the building pictures, the oversight (and I can't think of how I missed it in the sprue shots earlier) is that the top-mounted mg is not present in the kit and the shield is also gone missing, an AA mg is provided but it should be mounted at the rear of the vehicle, not the front. An odd oversight for a company that put lug-nuts on the wheels of it's models. But on to the build; 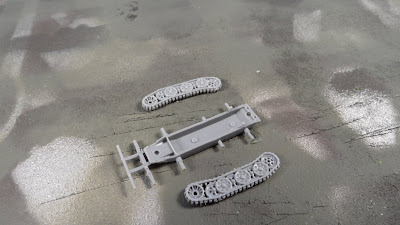 the chassis and track units 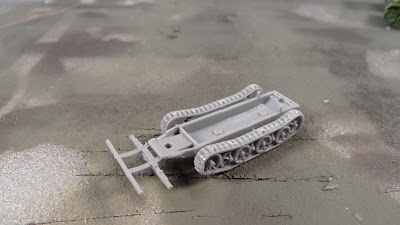 these went together very tightly

After adding the wheels I tried to attach the fenders to the lower hull. This is where I encountered the problem. Perhaps it is just me, but try as I might I could not get the parts to fit together. Always having been one for the most direct approach I cut away the portion of the offending part that was causing the trouble (see illustration below) and things went smoothly. 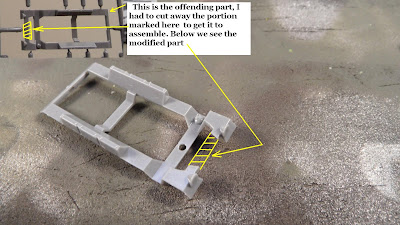 Once the lower hull and fenders were joined the top hull dropped into place and was ready to be joined to the chassis assembly. 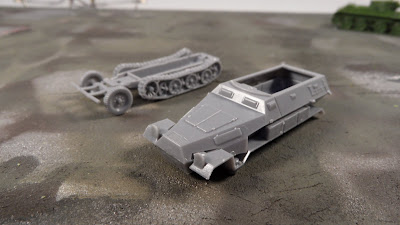 all parts fit snugly enough to not need gluing

The chassis and hull went together without a hitch and I added the MG to the model for the "as designed" look, I will get some plastic card and fabricate a gunshield for the MG later. The weird part is that the box-art shows it properly while the model is wrong.