Painting the town red, well, actually, everything but red.

Having completed the construction of our little village and having given it time to dry the working group re-convened to finish the project. Two mediums were used to paint the village (no, we did not hire a couple of mind-readers, we used different kinds of surface finish), let me restate that; two different form of media were used to paint the town, the first was normal everyday latex house paint, the second was a mixture of modelling paint and PVA (40/60).  Both work well with the house paint having a slight edge in coverage.

I returned to my bin of cheap brushes (I hope that the rest of the world has their equivalent to the US style "Dollar Store", I would hate to pay art-store prices for brushes that I know are going to get ruined) and secured a set for us to use. Thus armed Dan, Kris and I confronted the monster we had made. At first things went well (this should have been a warning) paint flowing. walls rapidly filling with color, lively banter, but then we came to a dreaded turn of events; we had to paint the window and door jambs. All those window and door jambs. Grimly determined to complete the project with time to dry before the Saturday game we attacked this task with the relentless energy of a Roman legion hacking its way through a Celtic warband. After hours of squinting and cramped necks we were done, or so we thought. Interiors....AARRGHHH!!!!
I have to confess that at this pint we wimped out and just gave them a quick "go-round" with a single coat of paint (sometimes even the same color we used on the outside) with a promise to return to the matter later. 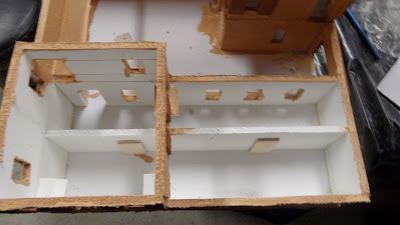 with the first coat you can be pretty sloppy 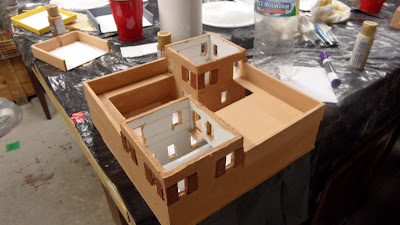 painting the shutters you have to be more careful 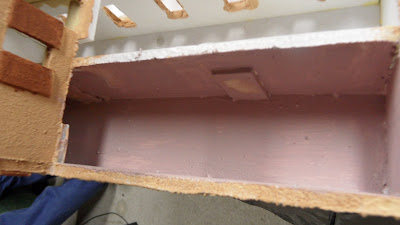 the inside of the cell block,
Amnesty International has already called to complain about the cruel color 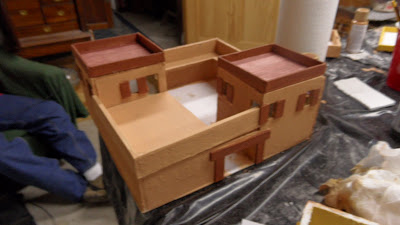 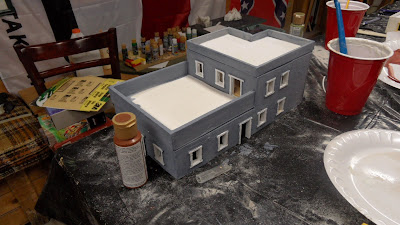 the bar, all those windows, what a pain 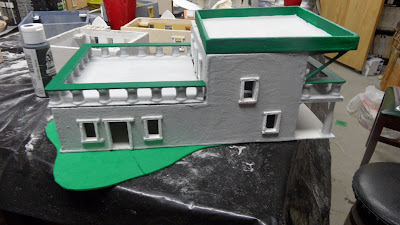 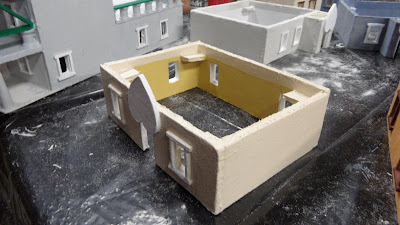 as did humbler buildings 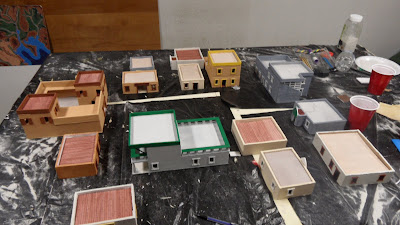 a group shot, rooftops were planked or sanded as the mood moved us

The planked rooftops were drawn on the Bristol Board with a permanent fine-tipped marker (a ball-point pen would work as well) and then washed with a wood color﻿, sanded roof got a coat of coloer glue and then a dose of Chinchilla grit. You need to dampen the other side or the card stock will curl, alternately you could cut you roofs from foam-core. The interiors were simply given a quick coat of color as, in most cases, we were not yet sure as to what we wanted to do as far as details go. 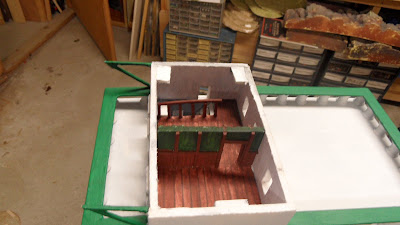 the Pasha has panelled walls and hardwood floors 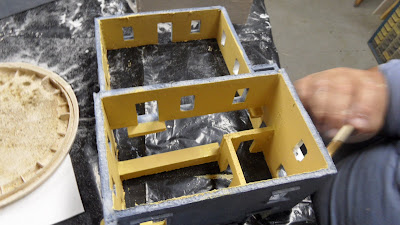 A couple of closing notes, the Chinchilla dust is a real find, it is very fine-grained giving a textured suface much more subtle than the sand often used in magazine articles. The finished product has a distinct surface without appearing to have been built of fist-sized rocks. I am favoring house paint as a good cost effective way of covering large areas, the DIY stores in my area have a paint-matching computer and can make it in any color you choose. They also sell it by the quart at a price that is a fraction of the color of hobby paints. I will be taking these building into hand for further detailing and weathering as time permits, to kill that "new neighborhood" look.