With the scene set and the players briefed we began play. 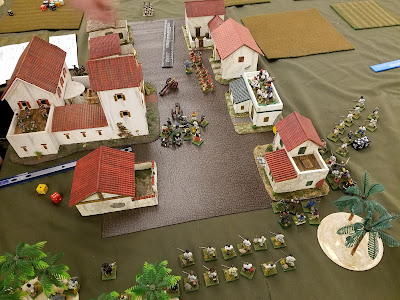 the day broke to the sounds of musketry and shouting as the Pirates had found and looted the farmer's cottages south of the town, with this short warning the Governor roused his men and prepared for a desperate defense, to his dismay the gunners were overrun before they could fire the cannon (Tom from Texas was the Spanish Governor and he was plagued all day by the most horrific Command dice in the history of wargaming) 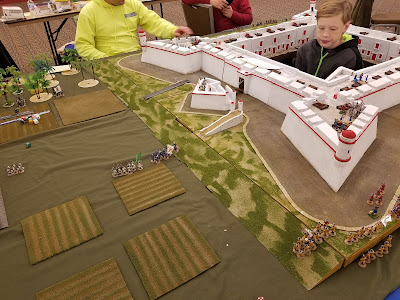 Thomas, safe in his fortress, greeted the landing of the British troops at the shoreline with aplomb (and a lot of cannon fire too!). In the center of the picture are the two units of Spanish that had been on their way to relieve the night shift in the fortress, at the very left edge of the photo you find the Governor's Bodyguard carrying away the taxes to the safety of the fort 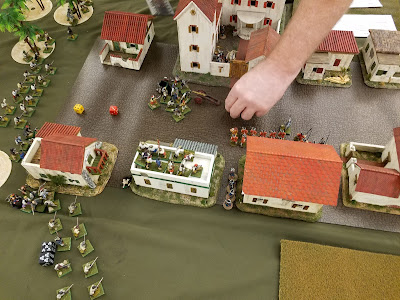 the Civic Guard (one unit of Raw Shot and a unit of Aggressive Forlorn Hope) had assembled in front of the courthouse, the Governor's guard had been bravely standing firm against the pirates but were badly outmatched as the Pirates methodically pushed them back (looting as they went) 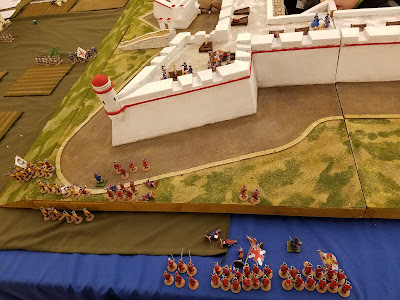 the British had gotten off to a slow start with half their force lagging badly behind, on the left the Danish mercenaries stepped off quickly (no doubt inspired by the thought that standing about under cannon fire was a poor choice of tactics) 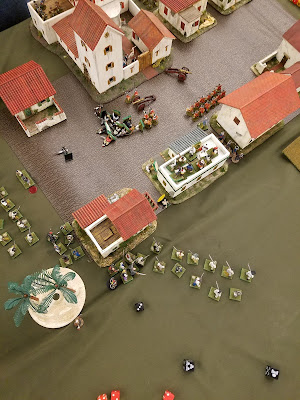 meanwhile, back in town, the Governor boldly led the Civic Guard pikemen against the pirates that had slaughtered his cannon crew, the scurvy lot was sent packing with much (one-sided) bloodshed 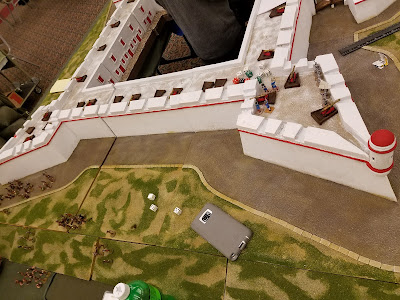 during all this commotion the Yamassee Warriors had been racing along the (almost) empty western edge of the Castillo, they were soon to take advantage of the completely untended state of defenses at the northwest bastion 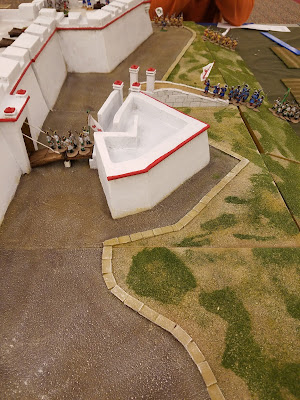 seeing that help was on the way, and knowing the parapet to be thinly held,
the Forlorn Hope in the ravelin  withdrew into the fortress 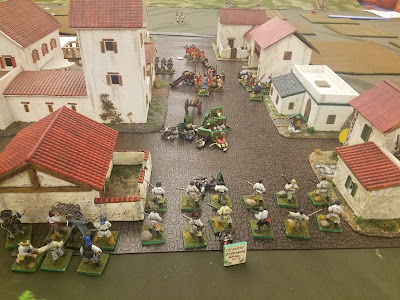 back on the Camino Royale the Governor readied his men for another assault on the villainous scum that had entered his town, the Civic Guard pikemen were particularly effective in this close-quarters fighting, they fought a brilliant rear-guard action as the other forces withdrew toward the castle 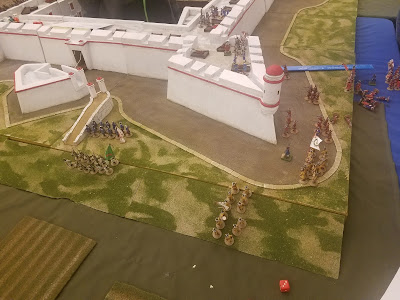 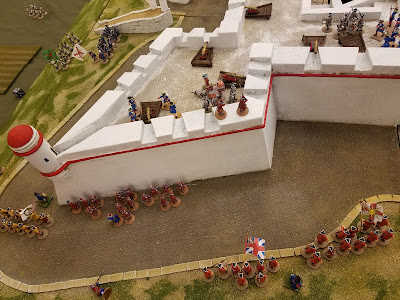 on the seaward side of the fortress the British pressed forward despite mounting casualties and unsuccessful scaling attempts, by this point the Yamassees had taken advantage of the unguarded state of the Northwest bastion and scaled the walls they were creeping along the western and northern sides of the parapet, this distracted the Fortress Commander and absorbed crucial defenders at this important moment 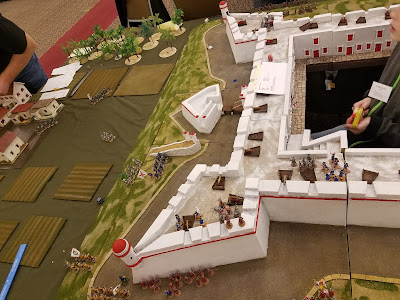 a larger view; on the far left the militia from the western  districts had finally arrived and were heading toward the town (those green-coated fellows in far left), in the center we find the Governor's Bodyguard still laboring to carry away the heavy boxes of gold and silver owed to the King, just to the left of the bastion we see the Danes and the Spanish squaring off and at the bottom center the British have finally gained the parapet 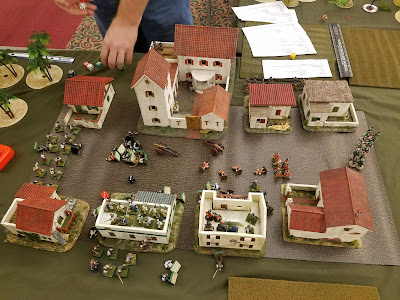 the soldiers from the western districts arrived to find the Civic Guard reduced to a shadow of its former numbers, the Governor's Bodyguard almost wiped out and the town half in the hands of the Pirates, the heroic blood spattered Governor waved them away, "The town is all but lost! Save the Castillo! For God and Spain!" before turning back to lead his troops into the fray once more 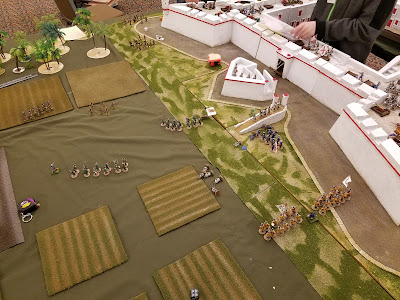 having made the trip to the Castillo and deposited the taxes the Governor's Bodyguard manned the ravelin, as the  Spanish morning relief troops wilted under the unrelenting fire of the Danish mercenaries the western troops marched rapidly toward the fortress, while the Governor shepherded the last of the town Militia  northward they found their path blocked by the Yamassee warriors 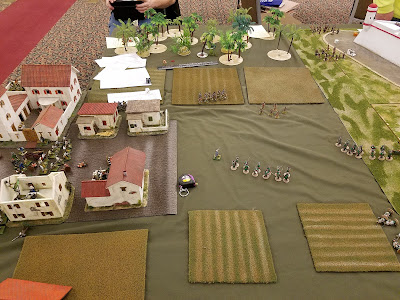 meanwhile, in the south, the Pirates finished off the last of the Civic Guard and Militia
and began to loot the town in earnest 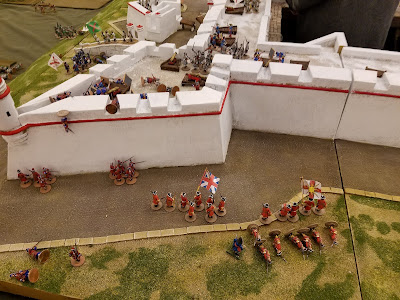 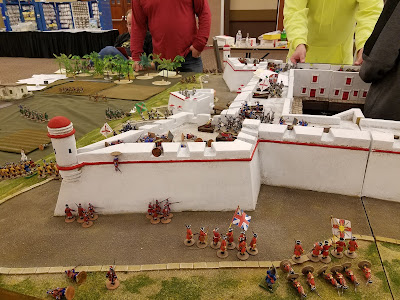 two units of grenadiers struggled to gain the parapet
while musketeers traded shots with the gunners on the wall, a bold but vastly uneven fight 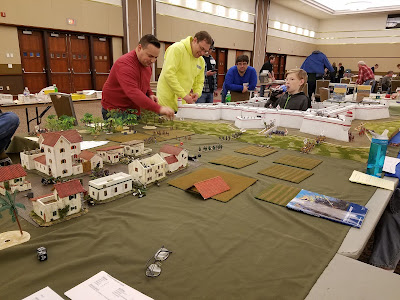 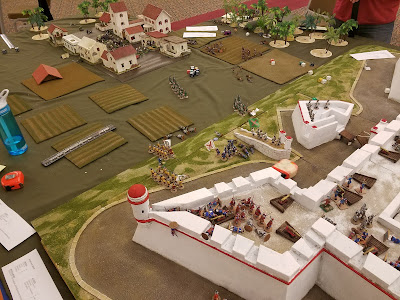 the scene at the end of the battle; the Pirates held the town, the British had managed to get three units of grenadiers into the southeast bastion and would soon brush aside the last unit of Commanded Shot that blocked their path, the Yamassees controlled two-thirds of the parapet and, in the farmland below the fortress, were closing in on the western district troops who were stranded in the center of the table without support, the Governor was last seen surrounded by the last of the town Militia, battling ferocious Yamassee warriors and bellowing threats at all who dared approach him.