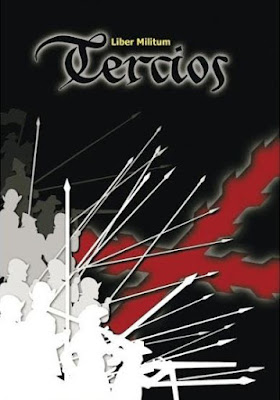 A little while ago I convinced Joe to play a game set in the Thirty Years War using the venerable George Gush rules. After five hours of play we had almost reached a tipping point in the battle, what we HAD reached was the end of our patience and we packed up the game and had a beer. It wa sonly then that Joe suggested that he had a different set of rules that looked like it would give decent results and would play much faster. Having painted over a thousand of the classic Minifigs 15mm Thirty Years War figures (a zillion years ago when they were new) I was interested in anything that would make gaming the period fun again and I instantly agreed to give them  a try.
These rules have been out for some time but this is my first encounter with them. They use an entirely different approach to the building of an army. Instead of buying individual figures and then organizing them into units as per Gush (and WRG, and a host of other 80's rules) under these rules one purchases entire units which have prescribed base sizes and combat characteristics. These units are assembled into formations which are commanded by generals. Generals have a set of basic skills and, if you purchase a more talented general they have access to a wider array of advanced skills.
At the start of each turn players deploy Orders cards (these describe what the unit is going to do this turn and offer a very limited choice of options) then they roll for initiative, the winner choosing to move a unit first or causing his opponent to go first. Play continues with each player activating and moving his general and units until all have been activated or have passed on activating. As units are activated they complete whatever their Order card reflects including firing and melee results before moving on to the next unit. Combat is conducted using d6 and rolling a set number of dice looking to achieve a target number on each die to score a hit, the target then rolls a number of die looking to save (a rather quaintly old-fashioned mechanic but it worked very well). Targets of fire or melee take reactions if their orders allow and receive and inflict casualties at the same time so the non-moving player isn't stuck waiting for his turn. Once every unit has completed its Orders the players begin a new turn and place new Order cards.
Having played games using similar systems I was concerned that this might be slow moving. To my delight and surprise the game banged along at a cracking pace. We had completed play after about two hours using armies that challenged the upper limit of the game-designer's suggested size. I was quite impressed and do think that this will be my go-to rules for this period for some time to come. 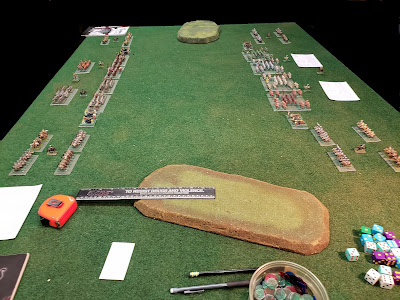 the battlefield and armies,
the Spanish Tercios on the right confront the Dutch battalions on the left 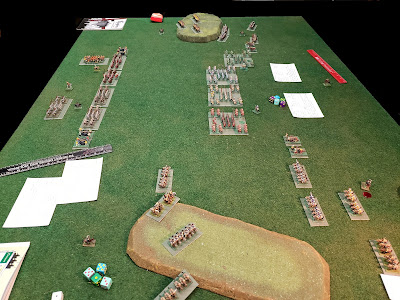 hoping that the tercios were as tough as the points cost would lead one to believe I led off with a giant push in the middle, my cavalry held back on the flanks and the guns aiming to batter the Dutch flanking units during my approach, Joe held the Dutch back as their guns pounded my tercios and his cavalry swept forward on both flanks 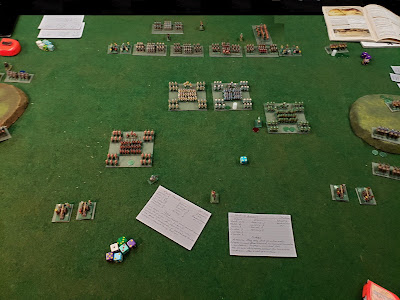 true to form (for any dice-driven system) my cannons were unable to hit anything, but my faith in the huge tercio formations was well-founded as they shook off cannon and musket fire to relentlessly advance in the center 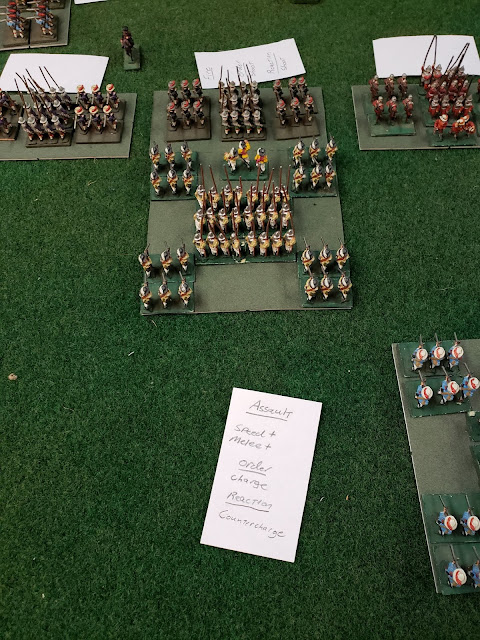 the Orders cards commit the player to an avenue of action but also allow a limited set of options; in this case I am Assaulting while Joe has issued a Fire order to his troops, the Assault order allows me to move a little quicker and I gain a couple of extra dice in melee, the Fire order allows Joe's Dutch to fire at me on the way in and gain extra dice for his shooting 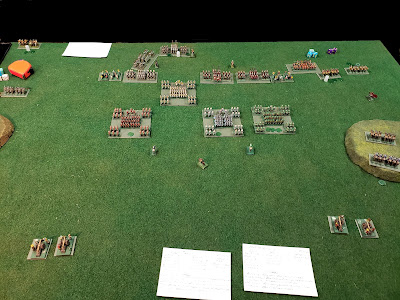 fortunately the tercio was able to sustain the battering by gunfire and gain the advantage in the melee, to my great surprise I did far better than I expected to on my right flank and my cavalry threw back the Dutch advance, things did not go so well on my left with my entire brigade being routed 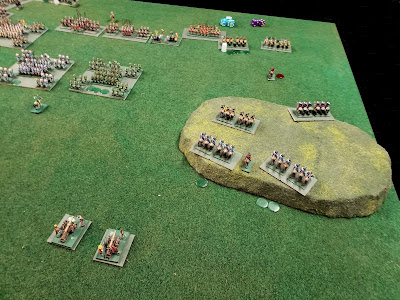 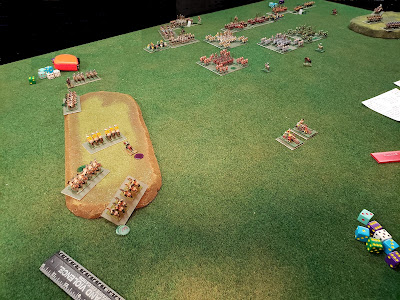 while on the left things are coming undone rapidly 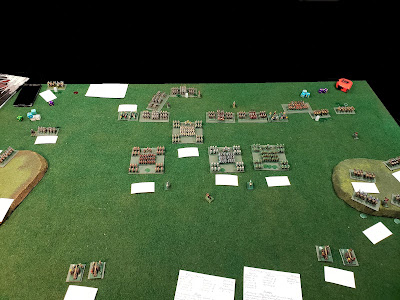 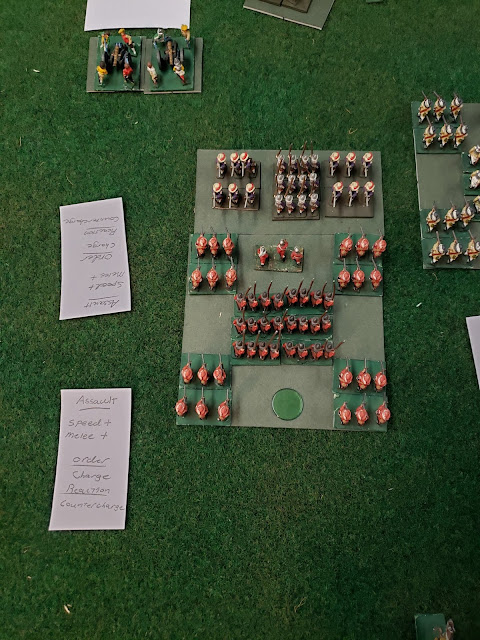 of course it turned out that Joe won the initiative, his Dutch battalions assaulted my tercio, my Assault order should have allowed me to counter-charge but my horrid dice-rolling meant that we just stood there and took it, fortunately a tercio can handle a LOT of "just taking it" and we were only pushed back a short distance 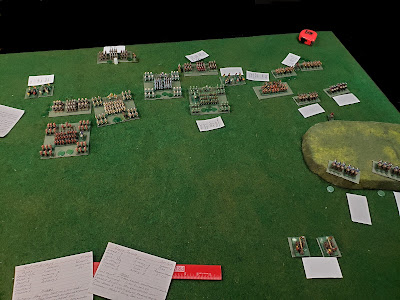 the rest of the turn saw my tercios slam into the hardy Dutch foot, driving them back and breaking one battalion, at this point it was clear that the Dutch were not going to carry the day and we ended the game after just two hours of play

I was well pleased with the ease of play with these rules and the simplicity of movement (very large bases with the entire formation on it greatly eased the speed of play). Combat results were reasonable, but shooting did seem a bit weak. Cavalry melees flow back and forth with sudden changes of fortune. Command is important and will be even more impactful when we begin to use the advanced rules. I am seriously considering re-basing all of my figures to match these rules (something that I have never done, for any rule-set, in fifty years of wargaming!).
Posted by Anton Ryzbak at 4:45 PM