Tell me again what was the problem with gray ships? UPDATED 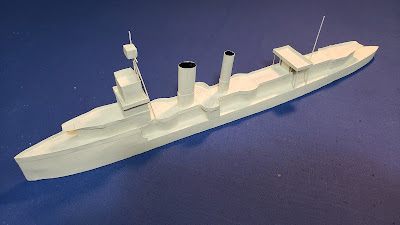 I just knew that something was going too well........
here we are back to all white

One of the things that has always kept me away from WW2 naval combat in any scale is that they just couldn't be happy with gray, or blue, or any other single color for that matter. Worse yet they didn't have the class to pick something attractive like buff over black. No, no such luck. They went with a "changing by the day" selection of camouflage patterns involving silly colors and a disturbing cross-breeding of cubism and impressionism. "Never you mind that HUGE column of smoke rising out of the funnels, this goofy pattern will make the ship disappear before their eyes....."
That little rant out of my system I spent some time trying to pin down the camouflage scheme that was in effect for RN cruisers in the Indian ocean during the period May-Nov 1942. It seems that they used three colors and had an "official scheme" (of which I was never able to find an authoritative source). As I read on I found out that although there was an official pattern the ship's captains had a great deal of latitude in putting it into effect (to the point where, even in Scapa Flow, the home of the Royal Navy in wartime, some captains simply refused to repaint their ships and left them gray). This left me with little to go on.
In addition the HMS Dauntless seems to have been one of the least often photographed ships since the invention of the camera. I found myself trying to use photos of  her sister-ships (black and white, of course) to try to reconstruct the camo-scheme. Needless to say, none of these pictures reflected the same pattern applied across all the ships, leaving me to think it was more of a guideline than an official instruction. In the end I decided to use the patterns as a guide and just went ahead and sketched out the scheme and started putting paint on the model. This means that, without fail, I will now promptly encounter someone who has made it his life's work to document the Dauntless and all of the possible permutations of its appearance over the years. So be it. 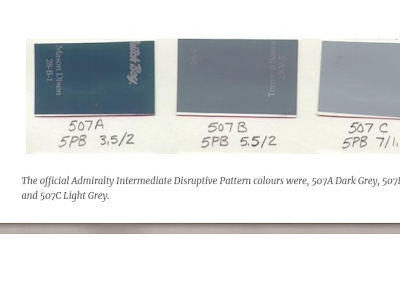 these are supposed to be the colors in use.... 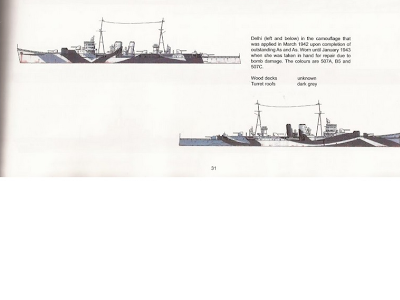 not the Dauntless, but a sister 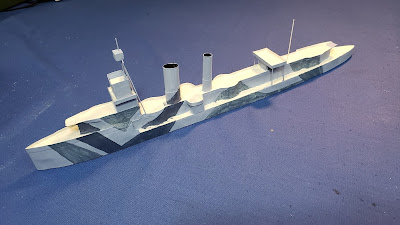 and we end up with this, anybody have a clue if the RN painted the wooden decks?
I swear that once I'm done with this batch of boats
I'm going to go back to ACW ironclads, I can understand "all black" 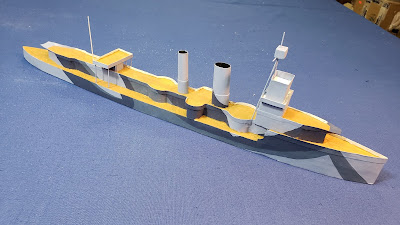 so I painted the deck brown,
the lighting makes it look like mustard but I swear it is really brown 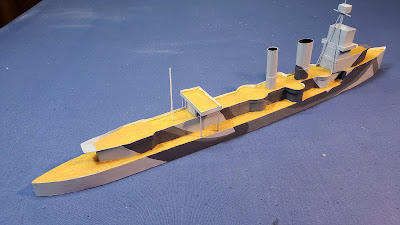