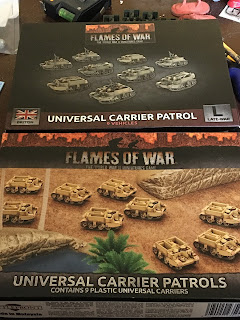 So Having gone through and gotten all of my Japanese and Chinese Flames of War paraphenalia squard away I began thinking about an inexpensive and simple ways to ever so slightly expand the gaming reach of the collection.  I do not want to wander off down the FOW rabbit hole as it is very easy to fall into the "for a few dollars more ..." paradox.   And that is when I stumbled upon this simple idea.  The Brits had oodles of Universal carriers and used them in EVERY theater.  Since the British and Japanese fought in Malaysia, Singapore and Burma quite intensely in 1941-2.  I thought this could be an inexpensive way to alternate the opponents.  And since all the tanks are not really armored at all, it would still make for an "interesting game.  Unlike Anton I am NOT a modeler and do not like building models, so simple builds are paramount to me.  I like to play games, NOT glue my fingers together!

A Universal Carrier patrol box from Battleground can be obtained for about 25$ online and provides you with 9 Carriers.  Craig at GA models can give you ten for the same price but his come either un armed and un crewed, or armed with a flamethrower and still uncrewed so I decided to spring for the slightly lower return on investment and got my choice of armament and crews.  Each box literally makes a carrier Patrol and there was at least one of these in every British Battalion circa 1941-2.  If you start fielding cavalry troops you quickly escalate your numbers. 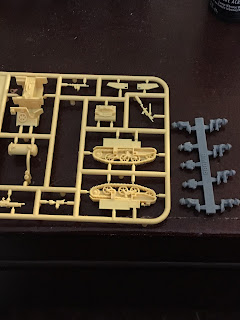 Each box contains nine trees exactly the same which is enough to build nine carriers of whatever type you wish (bren, atr, piat, and both wasp versions).  There is also three trees of crew men, each has nine crewmen in three sets of three poses.  Three drivers and three each of two different types of gunners.  The crewmen are molded from a SLIGHTLY more flexible plastic than the carrier, but not enough to effect the build. 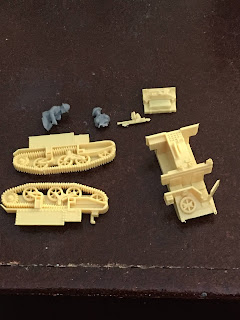 Here we have the majority of the parts (more on that later) removed from the tree.  The build is very simple and I will move through general construction with out comment. 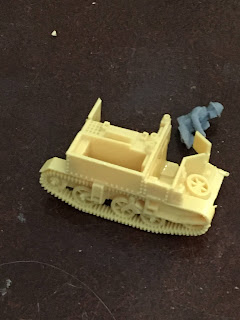 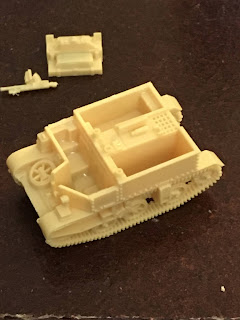 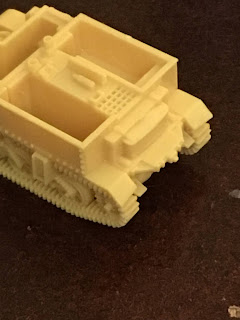 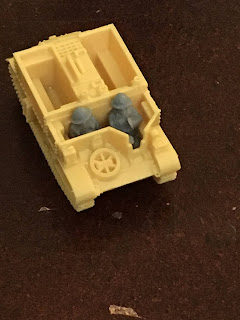 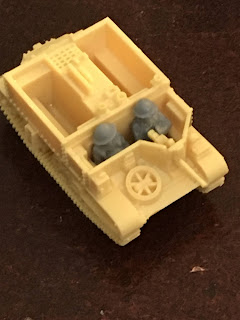 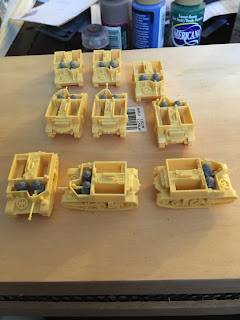 So here we have the more or less (explained soon) finished carriers, I proceeded to spray paint on the basic color (drab dark green). Then as the spray dried I built the second box of carriers.  These were the "Late war" variety, the difference being the color the carriers plastic was made out of and the crew men now came on nine individual three figure trees, one for each carrier.  While the second batch dried I hand painted the crewmen, guns and tracks.  At which point I noticed a problem.  If you look closely at the two sideways carriers in the picture above you will see my mistake. 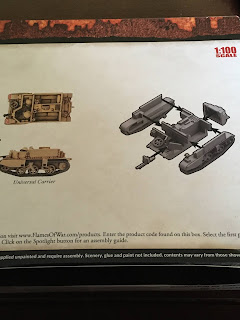 You see, my mistake was in following the directions.  I looked at the diagram on the back of the box and built what they told me to build.  The side plates that cover the drive gears are seperate plates and not shown on the diagram so I left them off. 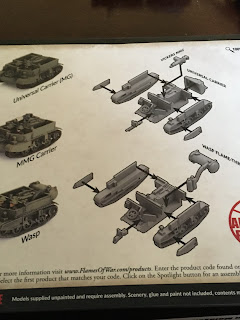 Here you see the back of the late war box, which I naturally paid no attention to at all as I was building those carriers. 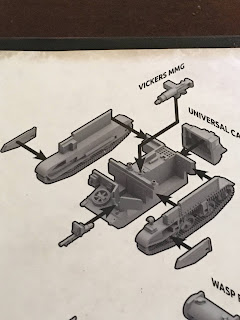 Here is a close up clearly showing the offending plates that I had ignored.

In my defense I will point out that I am not a Tank designer, nor do I have any affinity with drafting and blue prints, but it was a silly mistake. I now had to either spray over the finish carriers to cover the added plates, or hand paint the plates and try and get the colors to match up well enough for gaming purposes.  I went with the latter. 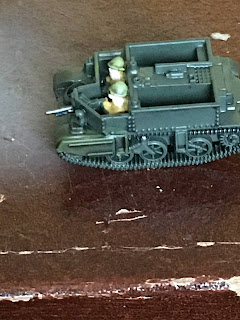 Here is a close up of the finished product.  The plate is painted with drab green hobby latex.  The latex is then given a heavy coat of Games Workshop Angrax Earth Shade which I find works marvels at darkening up any earth tone color.  The whole model is then given a heavy coat of Anton's Magic Wash (I put that crap on everything!) and finally given a light coat of matte finish to tone down the glare from the floor wax. 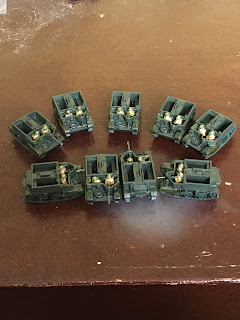 Finally, here are the nine completed (really this time) carriers from the patrol.

On an unrelated note, I became concerned as I built and painted these things that they were too large.  The scale creep in Flames of War products is infamous.  However after some quick research I determined that they are actually basically perfect in their scale/size.  A Universal Carrier is 12 feet long, 6feet 9 inches wide, and 5 feet 2 inches tall. 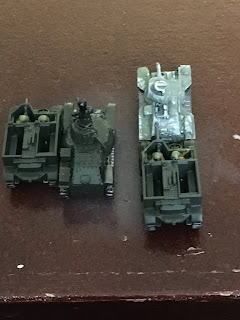 So if you find yourself in need of 15mm Universal carriers I can recommend that the newest version of Battleground's Flames of War carriers work marvelously.  Breeze to assemble.  Easy to paint.  And they turn out looking good in my opinion.

Posted by The Housemartin at 6:18 PM