Senatorial Roman, Son of a noble father. Father of a hearty family.  Newly elected Magistrate of the Aventine district of Rome itself.  And someday soon an actual member of the Roman Senate. 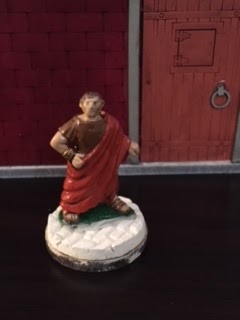 So, I have found another maker of buildings that look marvelous for Gangs of Rome (and another game that will be discussed in future posts I am sure).  The manufacturer is from Britain and called TTCombat (type "mdf" into the search bar next to the logo on their website to see all the really cool stuff they make, A.R.).  They make a range of building designed for a skirmish game set in Venice in the Eighteenth Century.  I really liked the buildings for a number of reasons: they looked great, came with the ability to extend the buildings vertically by addition of levels and were not too expensive generally ranging between 6 and 10 pounds sterling. 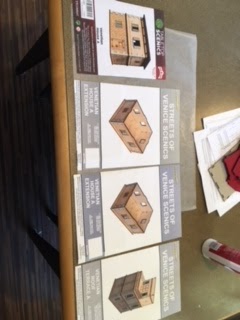 So I ordered a couple.  This is One "House A" kit, along with two "House A" extra floors, and a Roof Top Terrace.  The normal kit comes with a Venice appropriate roof, but this one works for a Roman roof. 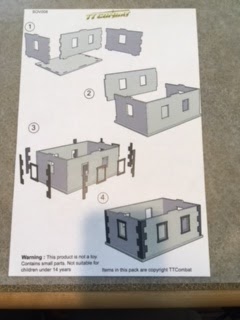 One problem became immediately apparent.  Out of four kits, this was the only direction sheet that arrived.  This does not pose a problem in general because as the picture shows the basic construction is gluing four walls onto a floor and then gluing on the trim.  As long as the building is simple the lack of directions is not a problem, but when things got trickier (the roof terrace) this became an issue. 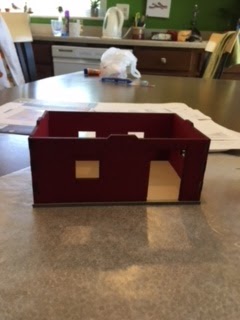 The basic construction was so simple in fact that I forgot to take pictures as I built the ground floor so here is the completed ground floor.  The kit comes in painted.  Learning from past mistakes I painted the kit on the MDF sheets, this company uses 3mm MDF (actually measures 3mm unlike Sarissa).  The Uber Matte spray paints once again were champs and painted the model but still allowed the laser etched details to show through. 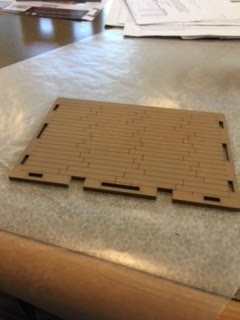 Here I will show the basics of the construction and note a three more oddities to these products.  This is the second floor base (I think, nothing is marked).  The smaller holes in the base will have tabs from the walls inserted for construction.  The larger Tabs on three sides (front left and right) are for locking the floors together when the entire building is stacked up.  The two notches in the (supposed) front are of no known purpose so I made one up later.  I have painted the floor with the Uber Matte brown and the details show through marvelously in this picture.  The combination of notches mean that there is no possibility of variance in construction as the fourth wall glues into the two side walls so if you tried to swap the sides you would have to turn the walls inside out.  The next oddity is that the basic building kit is cut differently than the floor extensions.  If you order the building the parts both floors are scattered across three different sheets of MDF.  If you extension all parts are on one sheet (except the floor itself which is loose in the pack).  I would have thought that the laser cuts would have been the same.  I also noticed that the side wall with the window was on the opposite side of the house from the second floor of the basic building kit, once again an odd production strategy. 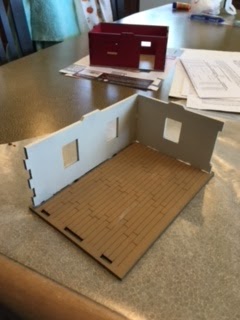 Here we see the walls being glued in place.  If you choose, as I did, to paint the building first then you will find that the tolerances for the floor slots are very tight and painted walls do not fit in well, but they will go in. 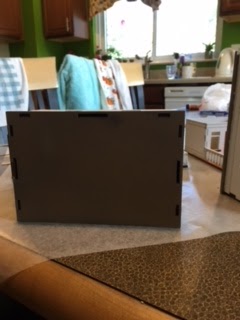 Due to the close tolerances I quickly realized that my previous trick of allowing gravity to assist my construction was needed here as well to keep the walls straight at the corners. 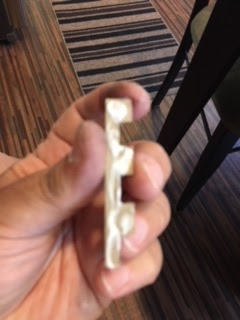 Next it is time to apply the corner stone appliques.  With these kits I discovered what that trashy weird cardboard that Sarissa is so found of is called as this company uses it also.  Apparently it is called "1mm Gray board"  It is used for all trim pieces like these appliques the window sills  (generally not used in Roman construction) and door frames as well as the roof to create a tile effect.  Anyway, two of these pieces are applied to each corner IN OPPOSITE DIRECTIONS as I discovered in construction.  Literally the only thing the directions provided really did show and I missed it, but managed to correct the situation in time. 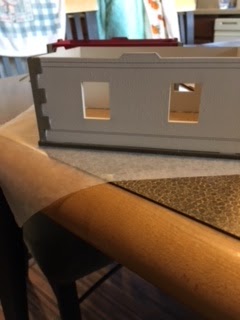 Here is the first one in place. 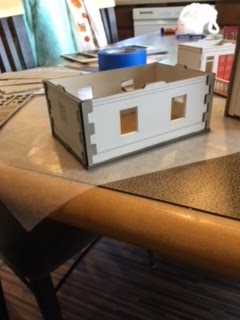 Here the opposite directions idea is shown.  It makes perfect sense since the idea is to show block work, but does lead to a lot of appliques.  Eight in fact on each level. 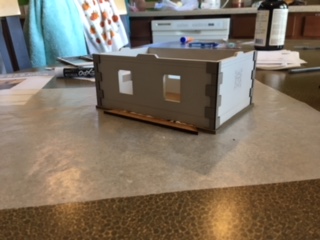 Here is another view along with my idea for filling the two notches in the second floor, a small canopy to shield those about the enter the building when the rains come to Rome. 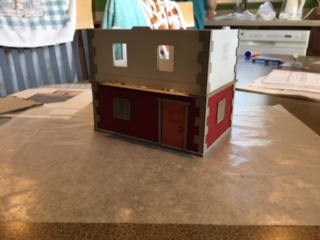 Did I mention that those eight appliques on each floor start to add up? 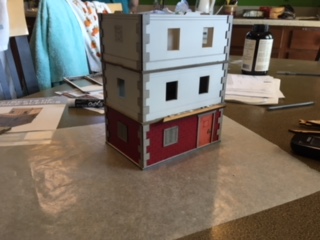 Kind of quickly in fact. 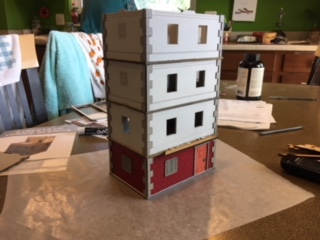 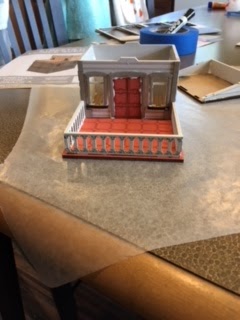 The roof terrace appliques are a nuisance, and the lack of directions for this one REALLY disappointing.  Eventually I figured it out, but not without wasting a lot of time holding things in place and staring.  The railing for example does not connect to itself, nor does it connect to the building.  There are two slots in the roof and two tabs on each railing. The longer piece is fairly easy but figuring out which way the side railing go was a hassle.  The roof was even worse as a very small piece of MDF forms the back of the roof at the low end (seen in the back right of this picture).  My initial presumption had been that there was no back wall and the 'tile' sheet would cover it.  I had to root through my trash and find the discarded sheets and retrieve the little fiddly bit needed (then quickly paint it to match and glue it in to complete the roof). 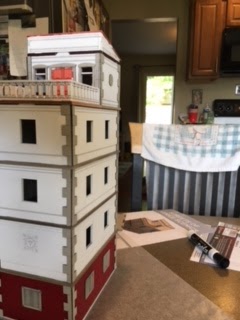 Here we see the completed building from the rear.  My idea is that this will form the end unit of a proper Roman "building" 4-5 stories tall.  More on that when those kits arrive and are completed.  I next put some of Anton's magic was to work, black for the brick first floor, gray for the next three, and some of each on the roof terrace depending on exposure to the elements. 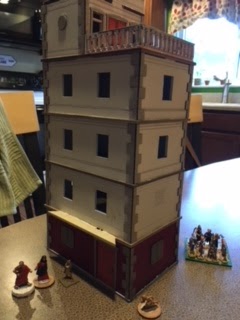 I will now step aside and allow our host, Magistrate Varrus to conduct us on a tour of his town house.  Literally the place he and family will live when in the city.  Naturally he also owns a 'comfortable' Villa outside of Rome where he resides when duty does not require him to e in the city.  Here Varrus, his wife and daughter usher us into their home while his rapscallion son scampers back from checking on tonight's dinner being prepared by the servants round back. As a sitting Magistrate, Varrus conducts interviews and hears simple cases in his first floor office. This space can also be used for entertaining guests.  Note the marble floor tiles.  Quintus is a man moving up in the world. 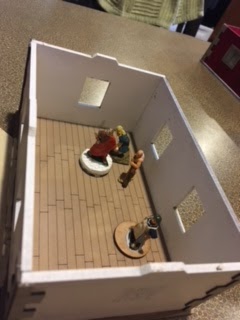 The second floor is where the domestic servants would put the finishing touches on tonight's meal and also where they would sleep. 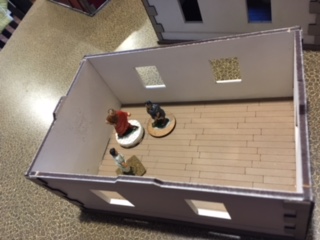 The third floor is a private meeting space for Varrus and important guests and business interests. 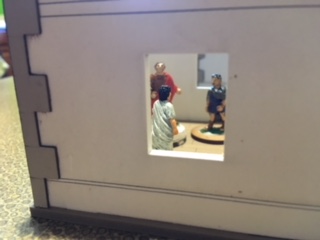 Here we scandalously peer in from the window.  What important matters are being hashed out by this august company?  The viewer is left to wonder. 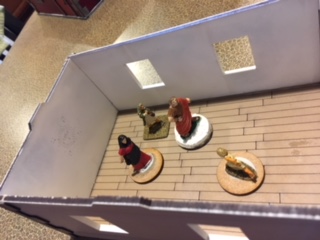 Fourth floor is family quarters, the "ADYTON" as the Greeks would say, (Holiest of Holies translated) where only family members and the most trusted personal servants are allowed access. 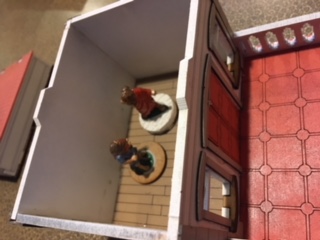 Varrus' personal space, his terraced retreat where he meets with his oldest and best friend to discuss political 'possibilities'. 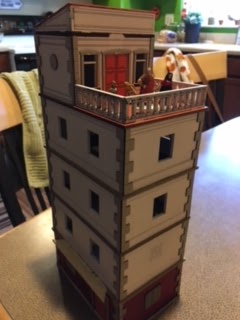 A final view of Varrus and his family taking in a sunset on the Aventine from his Terrace view.  Truly a Noble Roman Eagle sitting in his aerie and looking to the future.


Overall, this building is outstanding.  There are certainly some production issues, but the finished product is fantastic.  I think it looks outstanding, allows for modular development as desired and are not too expensive.  There are some issues, lack of directions being the largest still using the silly paper for the roof tile (poor design again) and tolerances in the connecting points as well.   But the final product is really good and I think it looks magnificent.


Once the other building arrives I will have a high rise Roman style building to complete the Roman Skyline.
Posted by The Housemartin at 2:26 PM