Or "Coniecturalem artem esse medicinam Medicine!"  ("Round up the usual Suspects!") 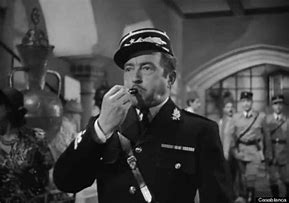 Consider this as a primer for who will be who in the Gangs of Rome Game.


I decided first off to ignore the ridiculous bases that are used in G.O.R. and go with simple round bases.  When I ran out of them I found a guy who makes clay bases in various styles which he then attaches to mdf or plastic bases as you choose.  I decided to use the clay on mdf bases for higher quality fighters and the simple round bases for the general fighters.  I then put the non fighters on square bases.  The idea is that the wolves know who the other wolves are by a special 'sense'.  At a glance all players will know which figures are potentially dangerous and which are not.  They will also have an idea on how tough a figure is once again at a glance.  By the way Anton donated some risk roman numerals which seem like a much superior way to keep track of figure damage instead of the silly Arabic numerals the game uses. 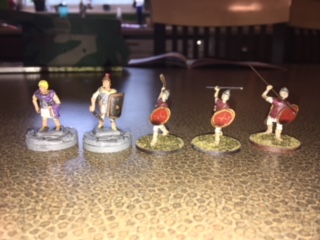 We will of course start with the forces of law and order at their highest level.  These are the Vigiles, their commander is on the left, their centurion is next to him and three general "pedes" round out the group.  The Vigiles are the "night guards" of the cities of the empire.  They patrol after dark only and are a combination police officers and firemen.  Fire fighting was the primary concern.  They are tough as anything in the Roman system as they regularly have to deal with off duty soldiers out 'helling' around after dark  When they show up, all trouble better cease.  They are empowered to use lethal force at their own discretion.  Equipped the same as the Roman army and thus the only legally armed people in a city, they are the toughest thing going. 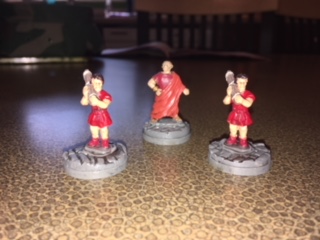 The next legal step down, and the day to day law enforcement of the Roman system, is the Magistrate and his Lictors.  The Magistrate is elected by the people of a section of a city and is responsible for being the judge, jury and 'executioner' in all legal matters.  While his powers do extend to the death penalty, they also get elected to the position and need to be seen as fair and even handed in their dealings unlike the next group.  While they lack body armor and weapons like the Vigiles, the Magistrate does carry the power of the "MAGISTERIUM"!  The two assistants of the Magistrate carry the symbol of his office - a fasces.  A fasces is an ax wrapped with a bunch of sticks.  Interestingly the ax head is sticking out of the sticks as is most of the handle for the ax.  Certainly not to be casually used to hack trouble makers to kindling, it is a somber and serious symbol of Roman Power. 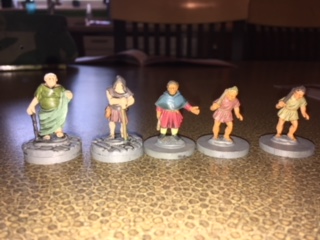 The last and lowest level of law enforcement in the Roman cities are the Aediles.  Officially a man is elected Aedile for a section of a city and then charged to hire assistants.  Together their job is to keep the narrow streets of Rome open for foot and wheeled traffic.  Basically these miscreants tried to stand around and make other people clean up messes on the streets of Roman cities.  Never above stealing if the opportunity presented itself, the Aediles are generally loathed.  The elected Aedile himself usually used their position to enrich themselves, but if pressured they would use the 'sticks' they are allowed to carry to help "leverage" stuck carts, to disperse crowds.


While these first three groups are not technically "gangs", they really are gangs.  These are the successful gangs that lower level gangs are trying to replace.  All three: the Vigiles, Magistrate, and Aediles are all elected to their positions and represent a level of success and legitimacy that all the "real Gangs" are striving toward. Here is the first actual gang.  I decided to organize most of my gangs on the racing factions so here are the "Whites"  The Dominus, wearing a healthy dose of purple is on the right and his top lieutenants the twin brothers: Castorian and Polluxus, are on the left. 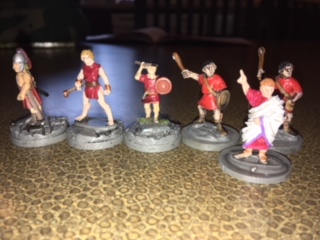 Here we have the Red faction.  As usual the Dominus is on the right and the leaders are on the Left, the "sinister" side in Latin.  Here we see the first female fighter armed with a ceremonial ax.  Being closely associated with the war god Mars, I figured it would be possible for an aggressive temple worker to end up on the front line.  The "Whites" while popular with the ladies were also viewed as the classical "Heroes" and were very much a Men's only group. 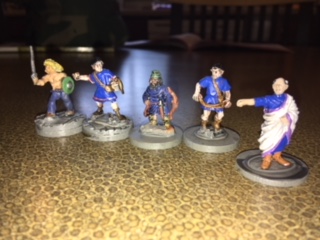 Next up are the Blues.  Generally these were viewed as the "Bad guys" in Roman tradition.  The Blues were also easily the lowest of the groups, basically the "C" or even "D" team of the Roman world.  In racing they won the least, BY FAR.  In the gangs, they get the fighters who are not good enough to be in the cool groups (read all the other three).  The observant reader will note that there are only four of them here This is because there will be multiple Blue Gangs and some co=operation is possible. 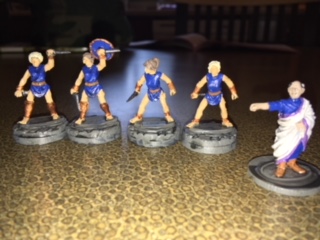 In the game rules there are several mentions of an all female gang, so I decided to make one.  The reason I did not include females in the Blue gang above was because there are plenty to choose from here.  The observant reader will note that unlike the usual gang which has a mixture of clay and non clay bases, but the girls are all clay based so they will be a TOUGH group. 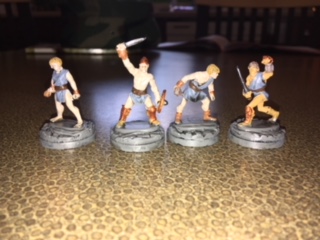 Of course no group of Blue Gangs would be complete without a gang of Slaves and here they are.  Naturally, the other Blue gangs will not openly associate with slaves, but that does not mean the certain "understanding" can not be reached and common goals pursued. 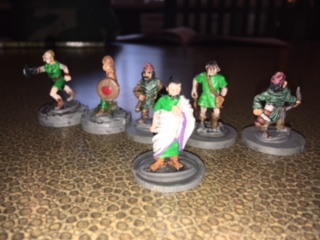 Last, but certainly not least we have the Greens.  The Greens were the racing team of the wealthy.  The Emperor's house was adjacent to the Green seating at the Circus, and quickly marked the Greens as the team to be seen on if you wanted to be someone in Roman society.  As a result of these factors our dominus is front and center, and observant readers will note that most of the fighters have missile weapons as the homes and property of the Greens will tend to be an objective in any game so they will tend toward the defensive trying to protect what they already have. 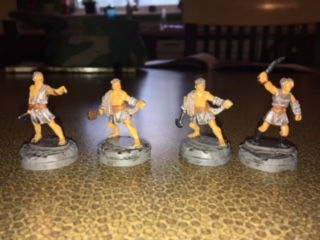 The next gang I just kind of wandered into as I looked at what I had built with these figures.  Basically the body is the same on each figure, the head and the weapon are adjustable.  I decided to make these figures my "fishmongers".  On the left the fighter has a meat cleaver.  The next one over has a mallet, commonly used by Romans to pound the heads and guts of fish to make Rome's condiment of choice - Garum.  The in-edible parts of fish: heads, guts, bones etc (offal as it is formally called) pounded to a paste, mixed with vinegar and allowed to ferment in the sun for a few days with some spices (varied by makers taste but usually garlic and aromatic herbs)   Easily the nastiest thing I have ever tried, and I have drank Pine needle beer and even Egyptian barley beer.  The third fighter has a gladiator's scissor which was derived from an animal scrapper.  The fourth has and older style Roman sword called a falcate which was still used by gladiators centuries later. 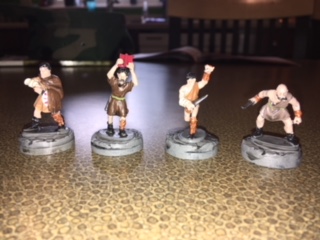 This group is made up of outsiders and not actually an organized gang.  Here we have a Carthaginian on the left, A Celt next, a Mesopotamian and an Egyptian.  These will be temporary hires, wild cards, and something for players to worry about in a scenario. 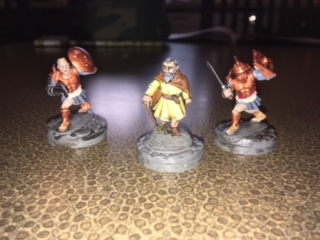 Here we have the last figures (actually I found five more afterward, but figured I just wanted to get these up and done).  There are two retired Gladiators who are specialist hired muscle that can be brought in when needed.  and the Slave trader in the middle.


So there you have them.  What remains is a swarm of "civilians" which will either make up mobs or just be milling around in the forums for eye candy.


In any one has any questions please post them and I will do my best to answer them.


Posted by The Housemartin at 9:17 PM