So, as warned previously I purchased a couple of Sarissa Roman Cargo boats months ago and have finally gotten around to completing them so here is the review for those who may be interested. 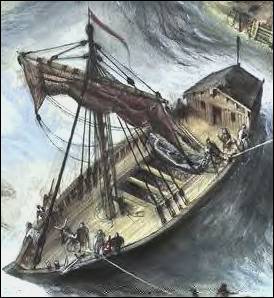 This is an artists rendition, what follows is Sarissa's version. 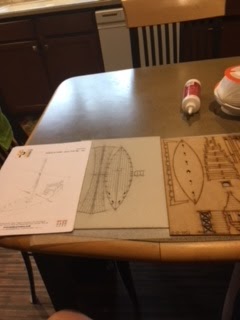 So here we are straight out of the shrink wrap.  One sheet of 2mm mdf.  One sheet of that gray board crap.  And the gray board makes up the deck and hull.  I was not impressed.  But I decided to put a smile on my face and give it a go and see what I ended up with. 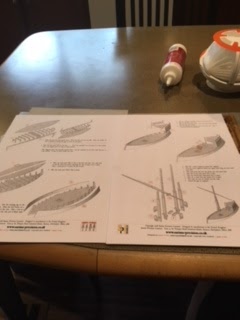 Actual directions included with the kit, something some other manufacturers could learn from (I am working on another TT Combat kit without direction again).  Overall pretty good, but there is one place where they need some work and the constructor will want to take their time in this effort. 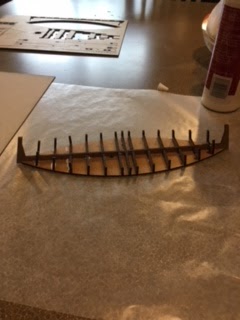 Everything starts off simple and straight forward.  There are no options, this will be a water line kit, and a fully laden waterline model at that.  The first step is gluing the ribs to the keel and then the keel to the base plate.  The direction say you can not glue the ribs in place first, but warn that this is more 'fiddly'.  Keeping thirteen ribs in place while you get half a dozen tabs on the keel into the base plate is fiddly enough, I did not want o see what they think 'fiddly' looks like.  During this phase the 2mm mdf showed its true colors once again and I managed to ham hand things and break the keel as I was getting out of the sheet.  Be careful as you remove the pieces, fortunately I managed to get the keel assembled and since the ship did not actually depend on the keel for stability the finished product was not compromised. 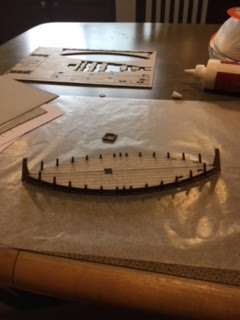 Next the 1mm gray board is glued down on the cross ribs and inside the elevate ribs.  This is a snug fit, but they do go in.  a little patience goes a long way and fortunately I had enough this day. 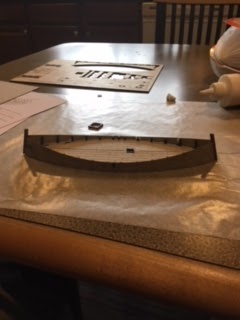 Next the sides go on.  Once again the sides are the 1mm gray board.  apply glue to the vertical portion of the ribs as well as the decking and base plate.  The manufacturers kindly provide a 'rib' on the central rib and a notch in the side boards so this goes together easily and then you just need to hold it in place for a few minutes while the glue tacks up.  Then repeat on the other side. 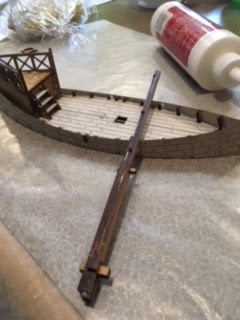 The next step has two elements going on.  First you assemble the three piece aft tower and glue it down then assemble the 6 piece (3 stair treads) front wall of the aft castle.  All that went very easily.  Second you assemble the mast.  There are 12 pieces to the mast!  It is a convoluted mess and I made a hash of the first one.  I made the mistake of following the provided directions which said to glue the wooden cross bits that go through the entire operation together and then into the first of the four main pieces that comprise the mast itself.  When I tried to do this they simply would not assemble.  Once the glue was on the three cross pieces simply would not fit.  In the end I did the best I could, skipped a couple of the internal pieces and settled for a slightly crooked mast alignment.  The picture above was my last attempt at keeping the cross pieces in place. 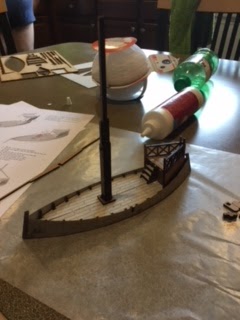 Here is the first boat finished. 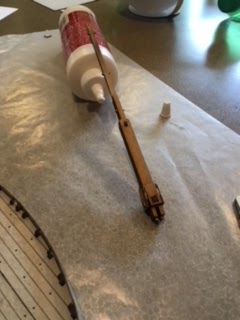 Here is the second mast properly constructed.  The key is to ignore the direction to glue the early bits in place and just fit them in, then count on the later steps to cement everything in place.  The second mast worked perfectly.  My best guess on what went wrong the first time is that the mdf absorbed some of the glue causing swelling, but I do not knw for sure.  If you buy this kit do not glue the early crossbeams in, just trust in the over all gluing to lock things down. 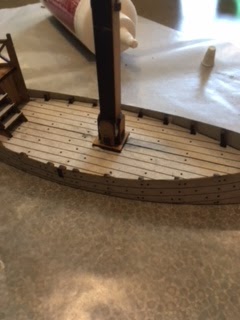 Here is a close up of the Second mast after getting it in place for what the thing should look like. 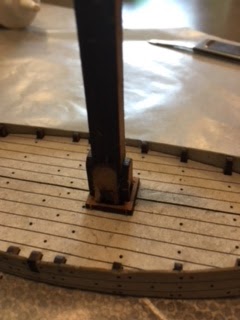 Here is an even closer view of the first mast in place, but at least it is locked in place. 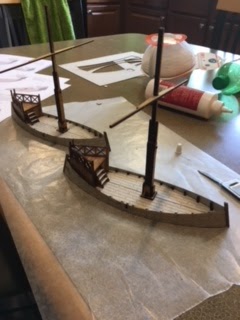 Here are the two completed vessels.  Wow will they ever REALLY work for Cogs! 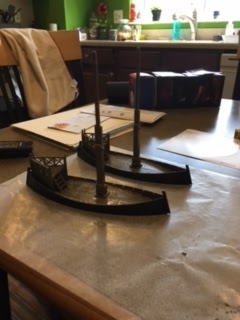 Here they are with some paint for finishing effect.  Both were painted brown then a black was added to the sides to simulate the effect of weathered and repeated application of tar for water proofing.  Additionally I gave the boats a coat of Anton's black wash (a double coat on the decks) for that dirty worked in look. 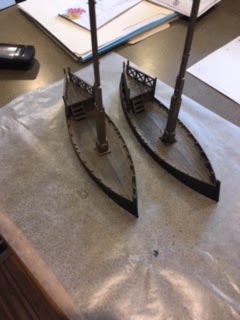 One final "bird's eye" view so the weathered nature of the decks 'shines' through.  I have not attached the spars as I am not sure what I want to do with them and am concerned about how well they will stand up if attached due to wear and tear from travel.


Overall, these kits are fantastic ... that's right I said these kits with their glaring use of 1mm gray board are FANTASTIC!  First off the gray board is attached to the ribs and the real support for the model comes from the base plate so in this case the 1mm gray board's massive failings do not enter into the final equation.  The boat feels strong and seems like it will take general gaming usage.  I am very happy with the finished product.  Further more, the actual model works perfectly for the intended Roman cargo ship, but it has multiple other possible uses.  As mentioned above it will certainly work for a Cog.  If you either left the stern castle off, or made it detachable this kit would also work for a knar, the Viking cargo boat.  The kit is reasonably simple to build (mind the mast!) and at about $10 each very nicely priced.

Posted by The Housemartin at 7:43 PM