Pike and Shotte tries the Dutch War of Devolution 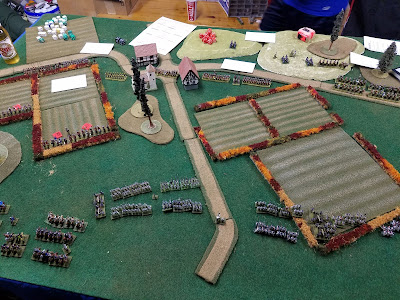 the field of battle, the French are at the near edge
and the Dutch and their allies are on the far side of the table

A few days ago Trunkmonkey was kind enough to bring over his collection of Editions Brokaw 15mm Lace Wars figures and host a game of Pike and Shotte focusing on the Dutch War of Devolution. The Editions Brokaw miniatures are from a bygone age ( I can't find anywhere on Google that shows them in production anymore) simple, perhaps simplistic and a true 15mm figure. Trunkmonkey's careful painting made them look quite impressive on the table, as the picture above shows. We had a few snags in playing as it has been a VERY long time since we played a game using any of the rules from the Black Powder/ Hail Caesar family. Once we had ironed out the correct application of modifiers play moved along. 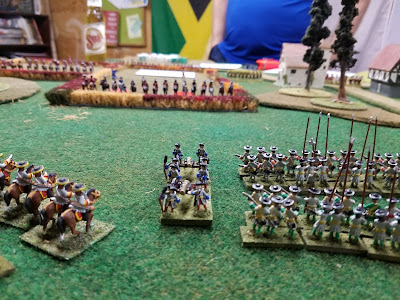 the French left encountered Dragoons deployed along a hedge,
this frightened them so badly that they didn't move for most of the game
(absolutely horrid Command rolls) 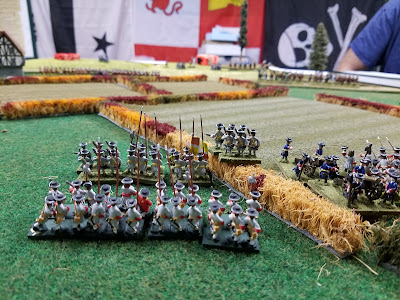 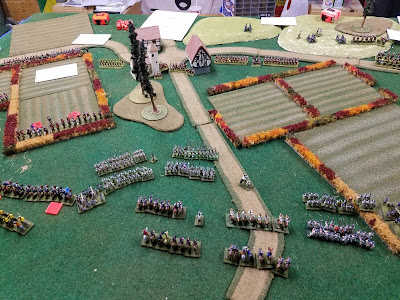 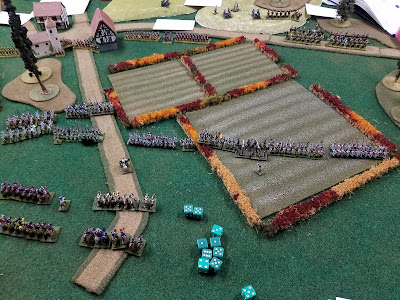 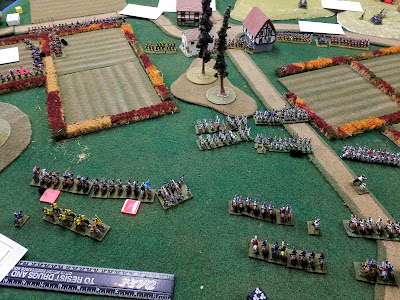 After we had ended the game we set to discussing the rules. I was struck by the fact that it is very nearly impossible to close with the enemy. The glacial pace of infantry movement combined with the high likelihood of becoming disordered by enemy fire made it hugely problematic. Even a charge by the Allied cavalry experienced several harsh rebuffs despite being delivered against Disordered and Shaken foot. I cannot imagine trying to re-fight a battle such as Landen wherein French troops stormed a fortified position in the face of ferocious fire, these rules would simply not allow a result at all like history.

The very low Stamina given to the units made passing tests a frequently failed feature of the game. After a lengthy discussion we agreed that the rules give a very good simulation of Great War combat with firepower dominating the landscape. I intend to give the rules a very close re-reading but, unless I discover a significant factor that we overlooked, I think that these rules will need a massive overhaul before we use them again.

Thanks again to Trunkmonkey for going to the trouble of carting his armies to my house and setting up the game. And thanks to the guys for the lucid discussion of the rules that followed.
Posted by Anton Ryzbak at 6:39 PM