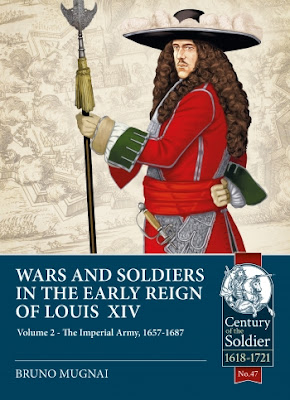 This second volume in the series is a vast improvement over the previous one in terms of editing and proofreading. It matches the level of erudition that is the hallmark of Mugnai's other works. This book examines the efforts of the Imperial Army in its dual role of Protector of Christianity and defender of the western borders against French aggression.In physical terms it is like the rest of the series, thick card covers and well-bound top-quality glossy paper pages that promise to be durable under any sane usage. The text is large and in an easy-on-the-eye font while the pictures are crisp. Mr. Mugnai's artwork, present in both color and black -and-white, is copious and delightful. It is precise yet evocative; my only complaint in this regard is that I would trade away the period portraits for more art by the author.

The text examines the evolution of the Imperial Army from the semi-feudal/mercenary status at the end of the Thirty Years war to a tax-funded professional military that carried on until it was demolished by Napoleon in 1809. The author first looks at the Austrian strategy, and then the Hapsburg one, and how they related to the Imperial situation. The Byzantine complexity of the old Imperial Circles and the conflicting interests of the Electors were gradually subsumed into a more coherent Imperial Strategy (not without a good degree of difficulty and never resolved completely) during this period. He then expands his view to include the Reich the political monstrosity that was the rest of the Holy Roman Empire and its web on conflicting interests, obligations and alliances.
With the political background in place the author then turns to the Army of the Emperor, starting with the highest offices and boring his way down through to the level of militia organization and maintenance. The level of organizational and administrative detail is fascinating, a modern student of military history will be appalled at the chaotic conflict between feudal privileges and the efforts to impose a rational system of management. Mugnai examines in turn the organization of the Infantry, Cavalry and Artillery as they evolved over the three decades covered by this volume. The Royal Hungarian Army, which had a distinct and separate existence, is looked at next along with the Militargrenze, the frontier militias. These units are considered down to the individual trooper; the recruitment, pay, service conditions, equipment, arming, housing, feeding and movement are all addressed.
The Reichsarmee is next treated to a similar dissection. Here the combination of many tiny principalities and Imperial cities combined to prevent a cohesive and powerful force from being assembled. The efforts to rationalize the process of raising a combat-worthy force in the face of the dual expansionist threats from Louis XIV's France and the Ottoman Empire finally led to the Laxenburg Alliance. This substituted a defined cash payment instead of a troop commitment. This finally allowed for the assembly of trained soldiers on a specific front that could be fed and housed without endless feudal haggling and was a huge step forward in making the Reichsarmee a worthwhile fighting force.
Having examined both armies at length the author turns to the use of the forces to conduct Imperial foreign policy. The campaigns all along the borders of the empire are looked at. These are all considered at the strategic level and many battles, each worthy of their own volume, are addressed briefly in order. The central position and extraordinarily lengthy borders of the empire meant that there were few nations in or around Europe that did not interact with the empire. The campaigns are only covered at an strategic level and there are a good many period illustrations of battles that I would dearly like to see examined as individual subjects.
The final section of the book takes a look at the evolution of the dress of the Imperial soldier during this period, from at situation of individual dress to the widespread adoption of uniforms provided by the state. This section really shines. There are  many period illustrations and the author goes to great efforts to explain the relevance of the portions of the pictures that he highlights. He is also not afraid to state that there are areas of uncertainty about the date of adoption, style or color of the uniforms. His line drawings are scattered through this section while his color artwork is concentrated in the middle of the book. Each color plate has a descriptive text assigned that often explains the source for his reconstruction.
The strong points of this book are a combination of Mugnai's vast knowledge of the period with his excellent artwork. Weak points would be terrible modern maps, either too small or devoid of detail while the period maps are reproduced at such a tiny size as to be nearly unreadable. I have no objection to period illustrations when they expand on a point that author is making or provide some relevant ancillary information, but sometimes it seems that the "graphics design team" add them simply to satisfy some obscure esthetic purpose. Overall the strengths greatly outweigh the faults.
Very highly Recommended. If you are interested in the Holy Roman Empire and its development between the end of the Thirty Years War and the Siege of Vienna you would be hard-pressed to find a better volume than this book. I eagerly await his further releases.