A Tupolov for every occasion 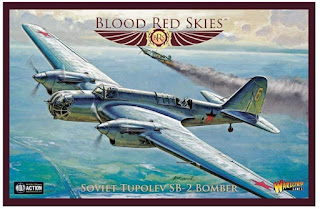 Officially known as the Tupolov ANT-40, but commonly referred to by its service name, the Tupolov SB-2, the Soviet Union created one of the most influential bombers in World History.  At 41 feet long with a 66 foot wing span this bird (Soviet crews nicknamed it the "Pterodactyl") was a tight flyer.  At a top speed of 280 mph she could outrun most fighters on 1934 and with four machine guns she could outfight those that could not be outrun.  Truly the prototype fast bomber.  However, with a payload of 2500 pounds of bombs she could deliver the same or more destruction than her medium bomber competitors.  There is little wonder why these "pterodatyl's" saw service with 11 different airforces in the 10 years from 1935-1944.


As I said, during the years leading up to, and including, WWII the Tupolov SB-2 saw service with many nations.  hey were used on both sides of the Spanish Civil War, The fascists loved to use captured planes, The Condor Legion grabbed them as fast as they could and even took them home with them after the hostilities.  The plane was also used on both sides of the Chinese Civil War.  The Czechoslovakian government liked the batch of 60 they bought so much they bought the license to manufacture them (calling their version the Avia B-71)and had made more than 150 by the time the Germans took over less than two years later.  The Germans continued Czech production for themselves (approximately 500 in service 9-1-39) and also sold them to the nationalists of China.  The Soviets supplied the plane to the Communists of China.  Bulgaria bought them from the Czech's and Germans, Poland bought them from the Soviets, Finland stole them from the Soviets and bought them from the Germans, and the Slovaks bought them from the Germans when they were set up as a puppet state by the Nazi's.  The Russians even used them to start the Famous Soviet passenger airline Aeroflot in 1940.

I managed to obtain 6 models of the plane in Blood Red Skies 1/200 scale, $20 total cost.  Therefore I decided that both sides could have a bomber wing of these heavily used planes.  Three of the planes were from a BRS box set, the other three were from Zvezda directly, the models are the same, but the Zvezda models do not come with the BRS "advantage" stands. 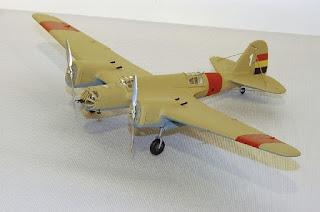 Here is a painted example of the Tupolov in Republican Spanish Service.

And here is an actual WWII era COLOR photograph of a Tupolov in German Colors during 1940. 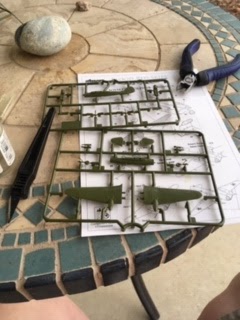 This is the two sprue trees that make up one model along with the basic tools for assembly. 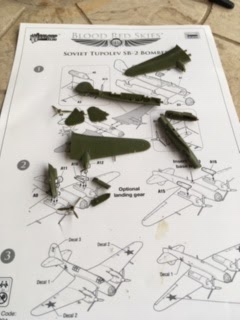 Here are the twelve pastrs that make up the basic assembly.  There are two optional pieces if you wish to have the landing gear down, these pieces replace two of the pieces in this picture.  There are also three canopy pieces that are separate to complete the assembly.  Since the canopy will not be painted I left them out at this phase. 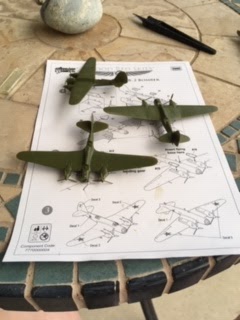 .  The pieces assemble rapidly and easily, however the propellers are VERY spindly, so do not expect them to last for gaming use. 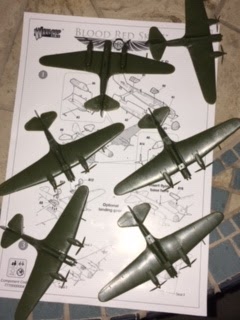 Here are all six basic assembly planes.  I did manage to screw up the tail wing assembly on two of the models, but testors came through for me and simply welded the tails on for me, although I did screw up the alignment on one. 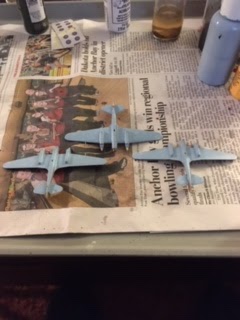 Next, while I am only showing three planes here both countries (Soviets and Germans) painted the undersides of the planes the same sky blue so that was done with all six models. 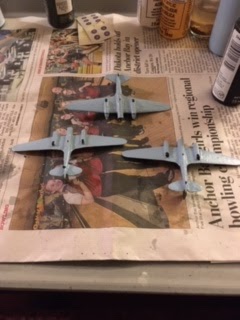 All six planes had their exposed wheels painted black. 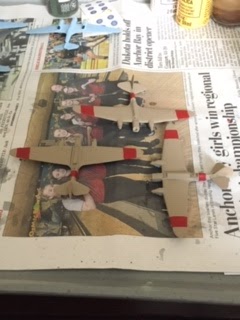 The Soviet planes in the Spanish Civil War used a very simple paint scheme.  Red stripes around the fuselage and Wings near the tips (the only thing the Communists, Socialists and Anarchists could agree on that would also not cut off funding from Western Democracies like Britain, France and America).  Plus, a Red, yellow and black representation of the Spanish Republican flag on the tail. 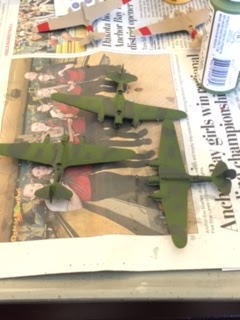 The Germans used a more irregular variant of the standard geometric pattern they used on basically everything early in the war, at least it was different than all the other German stuff I had painted. 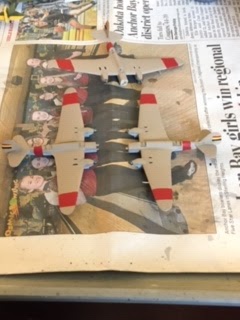 Here the Soviet exhaust pipes have been painted in on top of the wings. 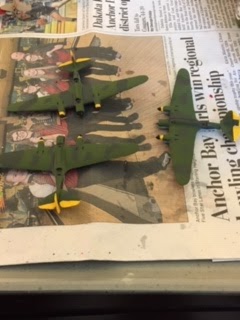 Here the Nazi yellow tails and engine nacelle rims have been added and the exhaust pipes and black propeller hubs (I had previously given up and removed all the propeller blades as they were continually breaking off). 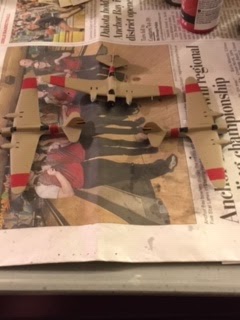 Here I have painted the cockpit, rear machine gunner canopy area and bombardier position black so that when the clear plastic pieces are added it should still look like the interior of a plane under the see through plastic.  Also the propeller hubs have been painted gun metal. 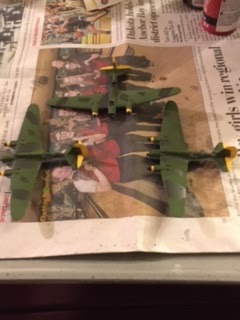 Here are the Nazi birds ready for their finishing touches.  There was no need to paint the "interior" portions of these planes as they were already a dark color. 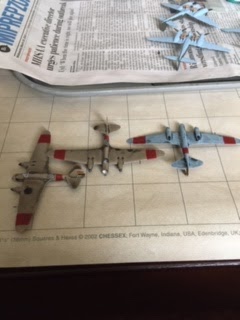 Here we have the finished Soviet planes with their clear glass elements added.  they have t=my usual three coats of Anton's wash on the top and two coats on the bottom.  Large black spots were left on purpose as such stains were VERY common on these Soviet planes due to the location of the exhaust pipes on top of the wings and poor quality Soviet fuel which seems to have led to many backfires in starting.  The front end bombardier position's twin machine guns, which come in clear plastic, have been painted gunmetal..  Two serious constructions notes from the installation of the clear bits.  First off, at least for me, determining which end of the rear canopy (dorsal MG position) was which was very difficult and it simply will not go on the wrong way and is a tight fit the correct way so it is a nuisance.  Much more importantly, there are two bubs sticking out of the front of the fuselage for the bombardier position 'glass' to attach to.  These simply will not fit he glass properly.  I had six tries at it, and could not get the glass to fit correctly.  It will go on upside down (the machine guns are supposed to point downward), but will not fit properly with the pegs right side up.  In every instance I ended up breaking the pegs off and just gluing the front "glass" in place. 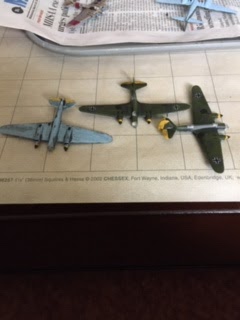 Here are the Germans completed .  Again the front "glass" is simply glued in place.

So there you have  the Soviet Tupolov SB-2 bomber aka the Avia B-71.  Like most of the Zvezda planes I have built in this project (JU-52, Lisunov Li-2, Tupolov SB-2, and JU-88 {forthcomming}) there always seems to be some "issues" with the assembly, but nothing too horrible, or at least can not be sorted out.  The models build easily and paint well and look fine for gaming purposes.  I can not conceive of anyone building these for pure modeling purposes because while they are accurate, the assembly issues can throw off the accuracy at times (tail planes on these).  But they are inexpensive and easy for the non modeler so certainly have a place.
Posted by The Housemartin at 4:55 PM