Italians in Belgium Bombing Britain ... Why? Because we can.

So as I painted through the Germans and British from Blood Red Skies, I noticed that there was really very little variation, on either side.  The Brits are Spitfire's supplemented by a few holdover Hurricanes.  The Germans are ME 109's, Various bombers, and some Stukas and ME 110's for something different (they are kind of siting ducks).  To make the limited selection of models worse, there was a VERY limited variety of camouflage, The Brits have two patterns, and the Germans really only one pattern.  So as I was slowly losing my mind painting the same pattern over and over again (48 times for the Germans, but who was counting), I remembered that the Italians stuck their nose into the hornets nest too.  So I resolved to find some reasonably priced versions of the Italian entrants if possible for variation. Shapeways provided the following. 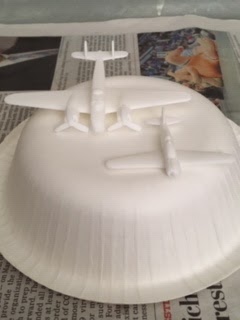 In the foreground is a Fiat G.50  and in the rear is a Caparoni C.A. 135.  The Caparoni is substituting for a Fiat BR 20.  Both have a same silly tail design and defensive armament, although the Caparoni is a little smaller and can carry slightly more bombs, at a slightly slower speed.

I will not bore you with the details of the painting as I was not planning on posting anything (didn't take any pictures) but Anton ordered me too put them up as he liked them so here they are.  I was not going to post anything because the Italians chose to paint the planes in a fairly similar color scheme to the Germans so the visual difference was lost. and the decals I sprung for were a bitter disappointment, so on the whole I was not pleased with the result although I do think the planes ended up looking good. 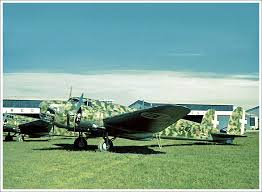 For the bombers I chose this picture to model the paint job on.  It is a real photo, and it was easy it see the pattern.  As you can see it will be another dark green scheme with blotches, but they are beige this time so they will look different. 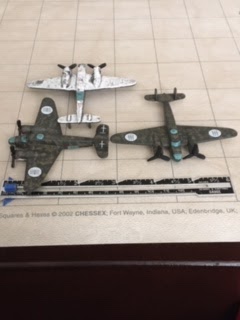 Here are the three bombers finished at various angles.  The first disappointment is being hidden here, the decals I bought did not have enough for three planes, so I had to make do as best I could. 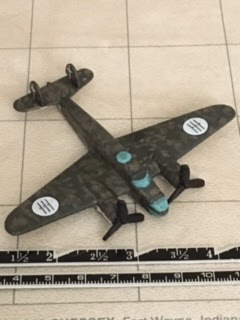 Here is a close up of the bomber from above (Dorsal) on an angle to allow the tail markings to be visible. 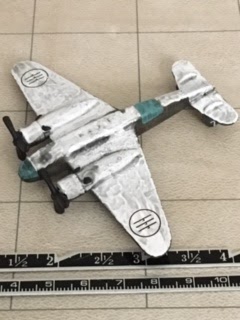 Here is a close up of the bomber from below (Ventral) side, for no apparent reason. 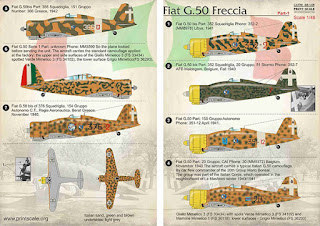 The appropriate plane is on the right side second one down.  I used this picture for the fighters because it presented a good close view, again it will be another dark Green plane with blotches, but this time in black. 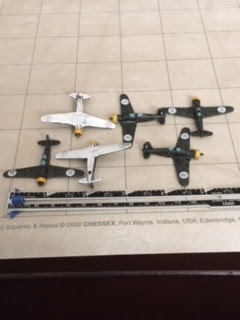 Here are the six fighters in various poses.  The Italians also sent Fiat C.R. 42 Biplane fighters in addition to the Fiat G.50's.  However, I resisted the temptation to include them. They actually performed well and drove the Brits daffy when they fought.  Obviously, the Fiat CR 42, which is about 100 miles an hour slower than a Spitfire, does not "catch" a Spitfire,but they could still keep the Spitfires off the bombers.  The Brits found that if they attacked the biplanes the biplanes could execute a quick flip and hard turn swinging around on the Spitfire.  If the Spitfire was not careful, the Fiat could even get in some shots at the Spitfire and with an armament of two 12.7mm machine guns, the Spitfires did not appreciate those shots.  If the Spitfires ignored the biplanes and went after the bombers, then all the Spitfires could do was make a fast pass otherwise the the even slower bombers allowed the biplanes to catch up and jump the spitfires from behind inf the Spitfires tried to focus on the bombers for effect.  No Fiat's were shot down by the Brits during the Italians time in theater.  But the Italians shot down no British fighters either.  Since the whole thing was moot, I left the sillyness out. 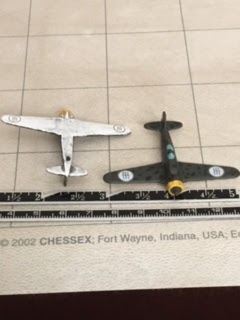 Here is a close up of two of the Fiat G.50's.  Even though the plane had an enclosed cockpit, the Italian Pilots ALWAYS left the canopy open on preference.  In order to reduce the amount of air getting in the cockpit flip up windows were added to help streamline the plane for better aerodynamics.  The model is faithfully depicted with an open canopy. 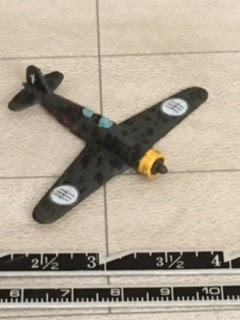 Here is an even closer shot on a deflection to once again show all the decals.  With all these decals after they were wet applied and allowed to dry for about 14 hours, I began applying a coat of Anton's Magic wash and immediately all decals floated away.  There are 12 decals on each bomber.  and 8 decals on each fighter.  All total there are 84 decals on these nine planes, that is a lot of repositioning of decals and I admit that a couple of them set in wrong and off center.  I was NOT pleased.  Fortunately the later coats of wax did not cause the decals to migrate again 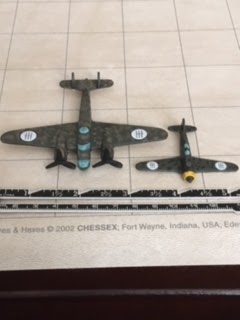 Here we have the two in close formation.  Look out Britain, here they come.
Posted by The Housemartin at 5:47 PM