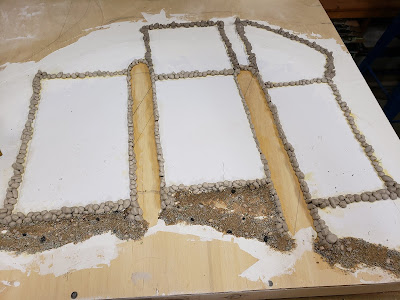 fields and canals is where we left off

Having double-coated the clay-ball "boulders" with a thinned solution of Titebond and allowed it to dry I began the next stage in finishing the Lowlands; Paint. I had added a couple of small hills to the "back forty" because it just looked too empty, and this is intended for a tactical game (we have all seen Gallipoli, running across open ground is just a bad idea!). The whole thing got the inevitable coat of chocolate brown paint and things proceeded from there. 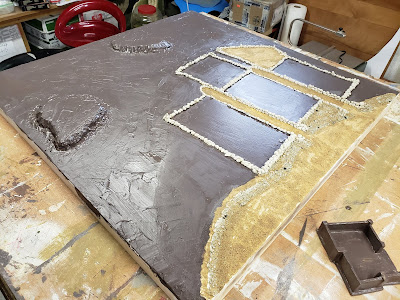 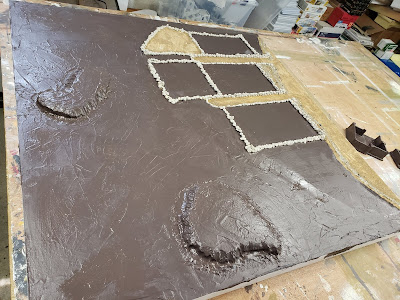 in the end I just went ahead and painted the whole thing,
aside from the walls 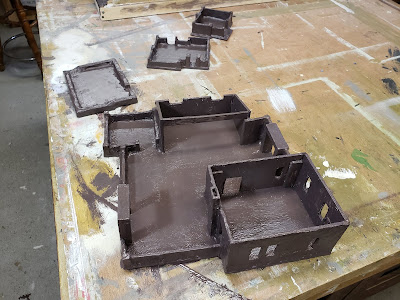 as a peace-offering for the undue delays in production I knocked together some
extra buildings and garden walls, they are the standard foamcore
and hotglue so I won't bore everybody with how I built them 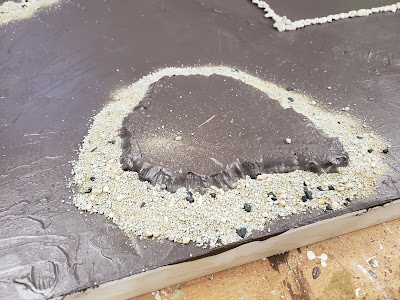 the hills got the True Grit treatment 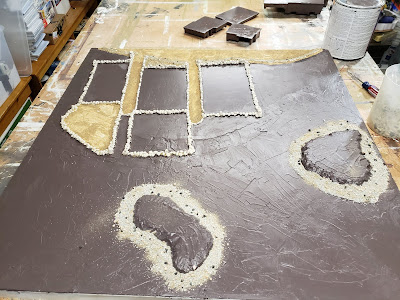 once that was dried the excess was knocked away and the painting went ahead full-steam, the entire surface got another coat of chocolate brown, into this wet paint was sprinkled sand for extra texture 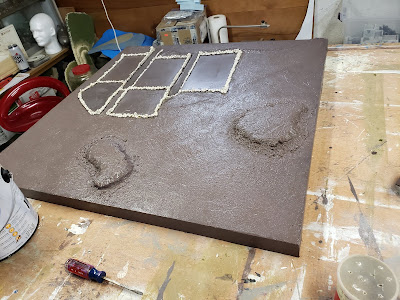 while that was drying I enjoyed lunch and then wasted an hour and a half watching "Fortress" on Amazon Prime; pretty sappy standard fare ' B-17s bombing the Nazis" but the CGI was decent 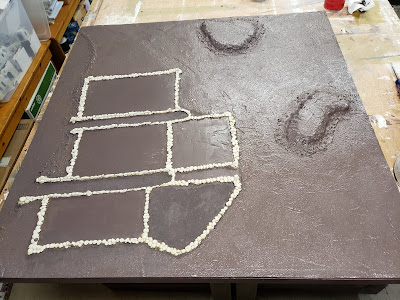 when I returned it was dry enough for the next stage 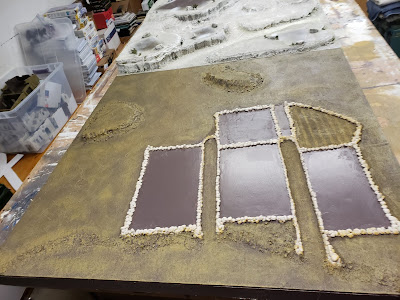 a good drybrushing with medium brown 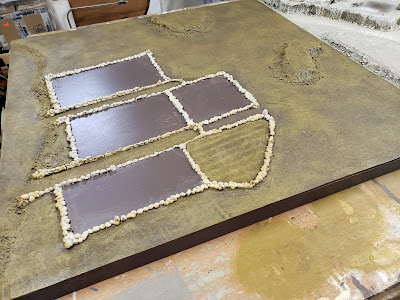 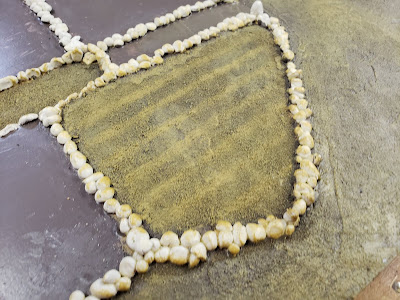 it will never appear in the Louvre, but it is a start 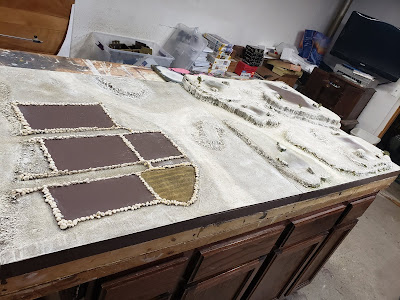 next came the highlighting,
to ensure that the roads lined up correctly I brought out the Highlands board 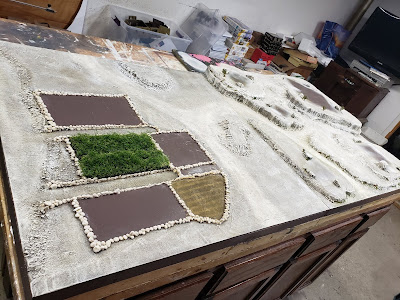 the poppy field is artificial grass that I picked up at Menard's as a sample,
I will have to go back and get a few square yards, this stuff is really rather good 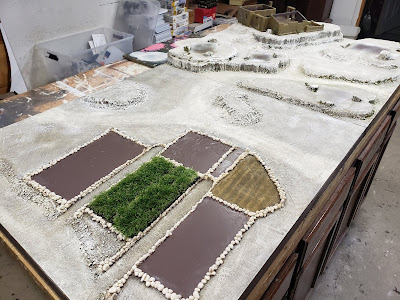 a glance at the conjoined boards 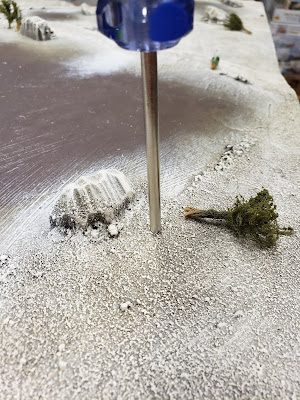 time to plant some shrubberies!
in the areas that had a layer of foam on it I just stabbed a Phillips
head screwdriver through the surface to make a hole for the stem,
the Lowlands required deployment of a proper drill! 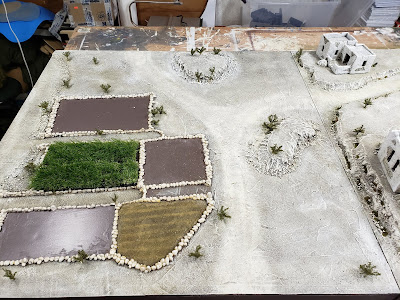 then I planted the shrubs all over the place 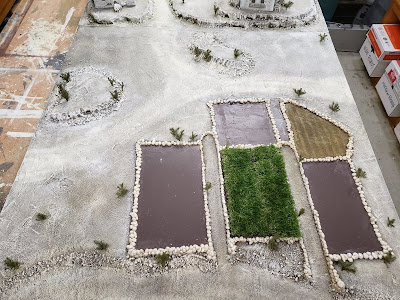 I am torn as to what to paint the poppy field areas,
shiny dark brown clearly isn't the best choice! 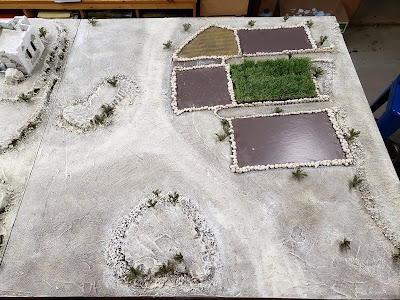 perhaps I will extend the plowed field look over them all 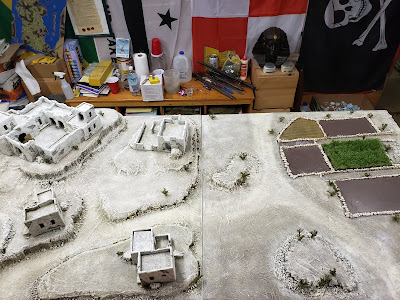 the two boards with the village on the Highlands 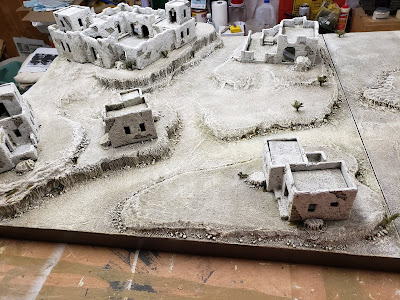 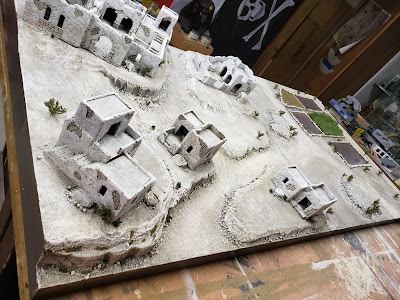 I may need some more highlighting on the Lowlands board 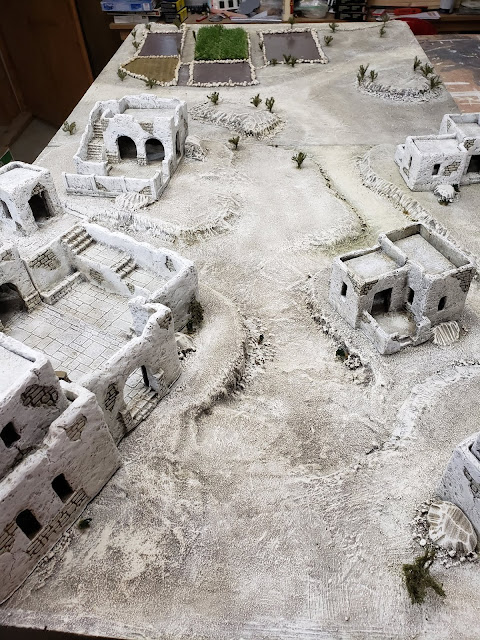 looking down at the river from the Highlands 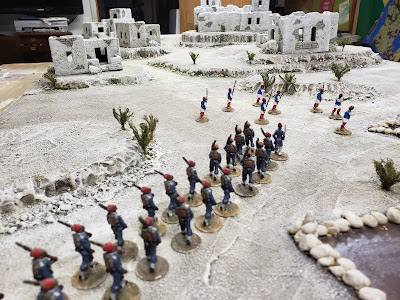 of course there is nothing to say that this board is trapped in modern times,
Afghan building techniques have changed little since Alexander visited 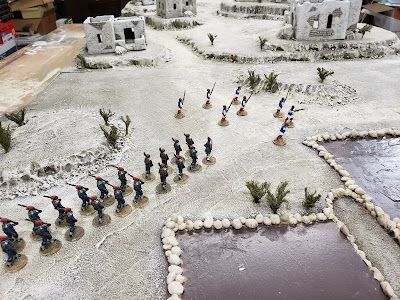 the patrol advances behind a screen of skirmishers 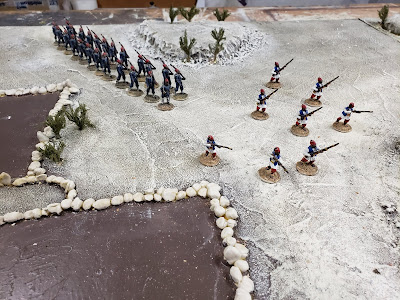 where are those Afghans we came looking for?