Hi ! My Name Is Paul 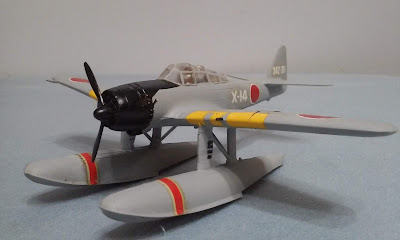 Also known as the Aichi E16A Zuiun, which means "Auspicious Cloud". This is the last of the Shapeways 1/200 scale planes that I had ordered. The plane has an amazing story so let me start by summing that up. The Japanese, like the Germans, had realized that the Panama Canal was a great aid to the Allied cause. The Nazis came up with a plan, Pelikan, that involved two JU-87 Stukas being slipped over to a Colombian island by U-Boat and then reassembled and then launched with "special" bombs to rupture the dam at the top of the Panama Canal. Hitler ordered this cancelled over concern that it had been compromised by Allied intelligence.


If he still had a functioning brain in that syphilitic head of his it should have been cancelled as a waste of time. The Stuka carries a 250kg bomb, the same as a Paul. The Japanese had calculated that it would have taken no less than three direct hits to break the locks. The German plan would have failed even if it had gone perfectly.

Meanwhile the Japanese had come up with their own plan, Operation PX. The IJN would build four massive (5,223 ton) submarines with a 17,000 mile service range. They would build a dozen special floatplanes that could also dive bomb! The submarines would transport the aircraft around South America into the Caribbean where an attck would be launched upon the Gatun gates holding back the reservoir at the top of the Panama Canal. So the Japanese went to work building these new machines. The subs took several years, the plan was launched in 1941 but the first sub was not completed until 30 December, 1944. The planes came along much faster. Initial versions were tested on merchant cruisers in 1942. Early versions had two 12.7mm mg in the wings and a single flexible mounted 7.7mm mg mounted for defense by the observer. The plane went through several versions, eventually getting a German supercharged engine and having two 20mm cannon in the wings and a 12.7 mounted for defense.

This plane came to my attention because two merchant cruisers carrying prototype "Paul"s were assigned to take station off the coast of Madagascar in the Spring of 1942 and thus were involved in the British invasion of Madagascar in May of 1942; Operation Ironclad. 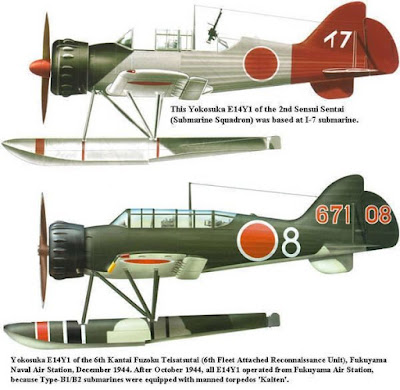 This is the standard Japanese floatplane that operated off of Japanese submarines; the the Yokosuka E14Y1 "Glen". The "Glen" could have two 7.7mm mgs in the wings and a third one for the observer for defense. It could also carry 152kg of bombs. One of these planes conducted raids on Oregon in 1943 trying to set the Pacific Northwest forests outside Portland on fire. The remained the only aerial attack on mainland America during the war. There were multiple (2-4 depending on sources) Japanese submarines assigned to Madagascar in the Spring of 1942 carrying these planes as well as two further carrying midget submarines.

For my purposes I decided to paint both the "Pauls" and "Glens" in very similar color schemes for my Madagascar campaign. Due to an absolute lack of anyone making the Glen, at least in 1/200th scale, I decided to start with the Pauls while I plotted how to get the Glens. Herewith the painting of my Pauls. 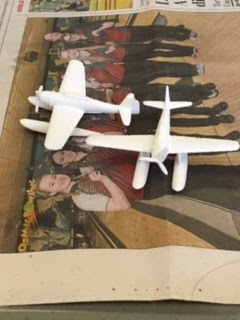 I purchased three Pauls from Shapeways and here are two of them as they arrive from the factory. Unlike the other models from Shapeways which I painted with nail polish before painting in military schemes, I decided not to precoat these models. My decision was against the suggestion of Anton and for two reasons; First the planes were not obviously hollow and lack the hole in the bottom present on past planes (although I suspect that they are still hollow), second I want to know if these models will survive without an extra coat of reinforcement. 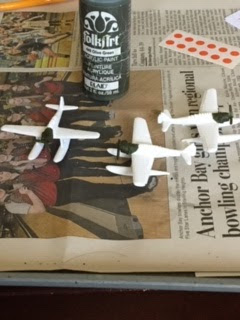 So, after painting the entire model in flat white as a base color and following the basic color scheme for the Glens shown previously, I started out painting the engine cowling and the area back to the canopy dark green. 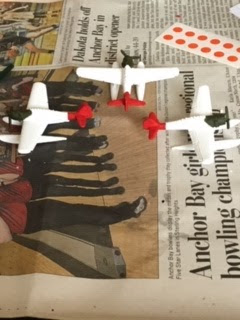 Next I painted the tails red. I aimed for one brush width (using a 3/0 brush) ahead of the tailplanes with everything behind that point being painted red. As can be seen in the illustration above the top, sides and bottom are entirely red. 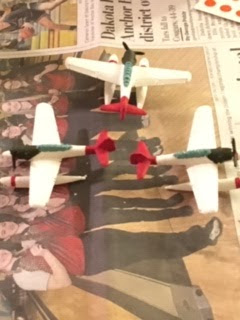 Third, I painted the red line on the float in line with the propeller, this is only on the portion of the float that is above the "waterline". 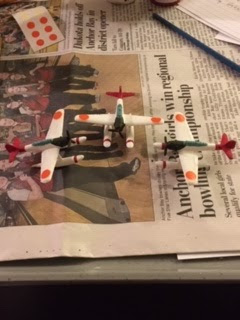 Next the canopy was painted to complete the basic camouflage, if you want to call it that.

As a last "detail step" added the decals from a Warlord games Zero kit that I had converted into another aircraft.  These were the stickers rather than proper decals. As you can see the stickers are orange and look more like raw meatballs rather than the  famous flaming red meatballs of WWII lore. I had hoped that Anton's "magic wash" would darken them up during the nest step. 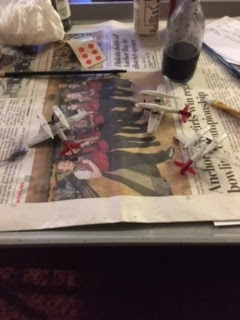 Here are the models with a coat of black Magic Wash applied to the bottoms, as you can see there is no hole in the bottom like the other models as I mentioned earlier. 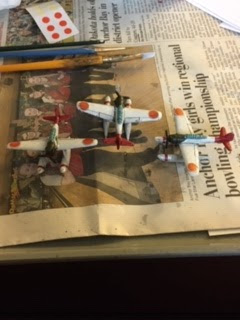 Here is the wash applied to the top surfaces, even the Magic Wash couldn't save those raw meatballs! I prayed that overnight, as the wash dried, that the Magic would save these woebegotten stickers. The rest of the planes looked really good though. 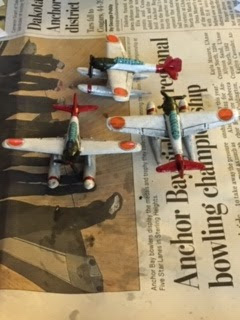 And the answer to my prayers was a resounding "NO!". Stupid orange stickers. 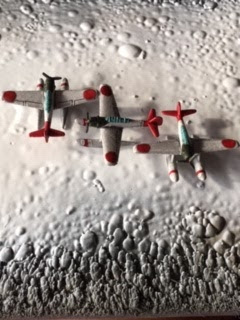 Then I remembered a power of Anton's special Magic wash; you can paint over it! I carefully painted red over the offensive orange. I let that dry and then added a coat of Magic Wash and two of clear. I the sprayed the planes with a light coat of matte finish to tame the glare and here is the finished product.

I must say it is refreshing painting these planes, even with the raw meatball problem. I had become accustomed to painting 12-18 at a time. Only painting three was quite easy.

The Shapeways models are true on scale, well detailed and hold up better than they fell they would. While these models were drying in my garage a strong gust of wind blew in and flung these planes halfway across my two car garage, They crashed into my wife's minivan and fell to the concrete floor. In all that the finished models suffered no damage, they seem stronger than they look and feel.